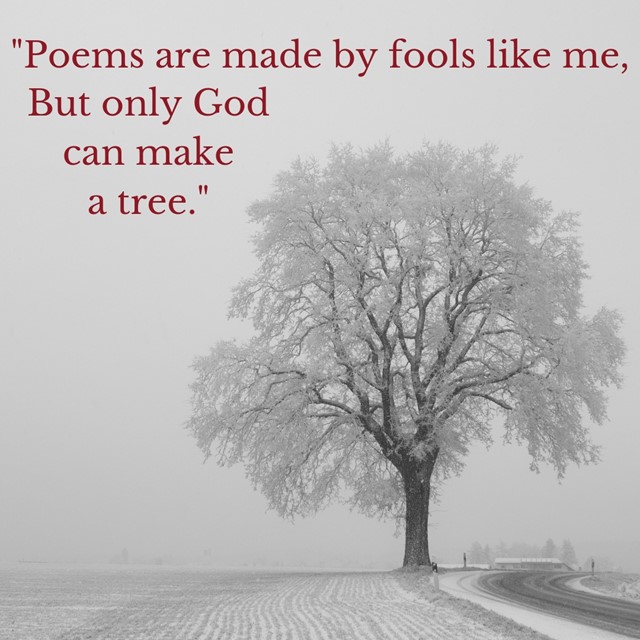 "I think that I shall never see A poem lovely as a tree."

Most of us know Joyce Kilmer for one reason only: He is the poet who gave us "Trees," the oft-recited, much parodied rhyming verse.

But Kilmer, born on December 6, 1886, did much in his short life. He graduated from Columbia University with a degree in journalism. He taught Latin at a high school and wrote feature for publications including Town & Country and The New York Times. For several years, he worked for Funk and Wagnalls, writing dictionary definitions to make a living while he continued to build his writing career.

– Ogden Nash providing one of many parodies

His final book of poems was published three years later, in 1917, the same year he joined the U.S. Army to fight in World War I. He continued writing poems while fighting with the Army’s 69th regiment. Kilmer was hit by a German sniper and died on July 30, 1918. He was 31 years old.

Led by a star, a golden star,

The youngest star, an olden star,

Here the kings and the shepherds are,

What did they come to the inn to see?

God in the Highest, and this is He,

A baby asleep on His mother’s knee

And with her kisses crowned.

Now is the earth a dreary place,

A troubled place, a weary place.

Peace has hidden her lovely face

And turned in tears away.

Yet the sun, through the war-cloud, sees

Babies asleep on their mother’s knees.

While there are love and home—and these—

There shall be Christmas Day.