A Peach of a Poem to Help Your Public Speaking 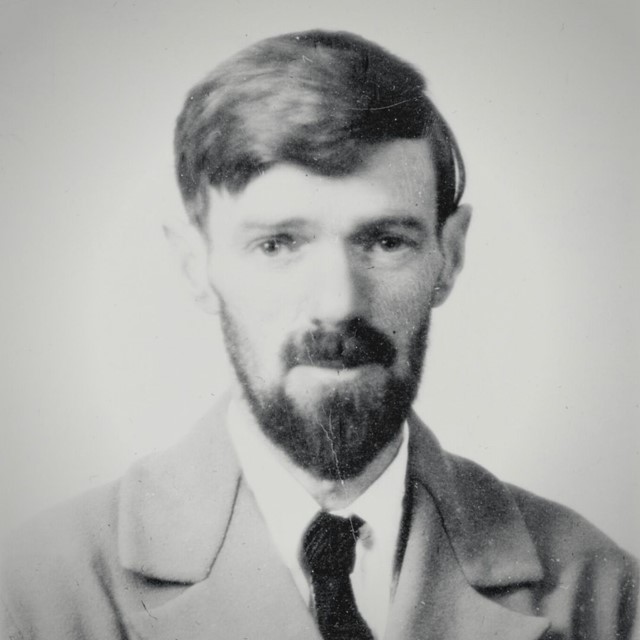 The Buckley School's founder believed that all public speakers should hone their presentation skills by reading poetry out loud. We keep that worthwhile practice alive by including a poem in our magazine each month for you to read aloud. Above, passport photo showing D.H. Lawrence in 1929, the year before his death.

"Why the groove? Why the lovely, bivalve roundnesses? Why the ripple down the sphere?"

Born in 1885, D.H Lawrence grew up in rural England, the son of a miner and a teacher. He witnessed industrialization and World War I, and often wrote about the dehumanizing aspects of the early 20th century.

Lawrence contracted malaria on a trip to Mexico and nearly died from the disease. His health was always precarious afterwards, though he kept producing new work. Lawrence died in 1930, just 44 years old. His friend, the Scottish author Catherine Carswell, wrote after his death:

"In the face of formidable initial disadvantages and lifelong delicacy, poverty that lasted for three quarters of his life and hostility that survives his death, he did nothing that he did not really want to do, and all that he most wanted to do he did."

As residents of a peach-growing state that's also home to the famous Peachoid, we found we could not resist offering this Lawrence poem for your read-aloud enjoyment.

Would you like to throw a stone at me?
Here, take all that’s left of my peach.

Blood-red, deep:
Heaven knows how it came to pass.
Somebody's pound of flesh rendered up.

Wrinkled with secrets
And hard with the intention to keep them.

Why, from silvery peach-bloom,
From that shallow-silvery wine-glass on a short stem
This rolling, dropping, heavy globule?

I am thinking, of course, of the peach before I ate it.

Why so velvety, why so voluptuous heavy?
Why hanging with such inordinate weight?
Why so indented?

Why the groove?
Why the lovely, bivalve roundnesses?
Why the ripple down the sphere?
Why the suggestion of incision?

Why was not my peach round and finished like a billiard ball?
It would have been if man had made it.
Though I've eaten it now.

But it wasn't round and finished like a billiard ball;
And because I say so, you would like to throw something at me.

Here, you can have my peach stone.