Books for Speakers: All the King's Men 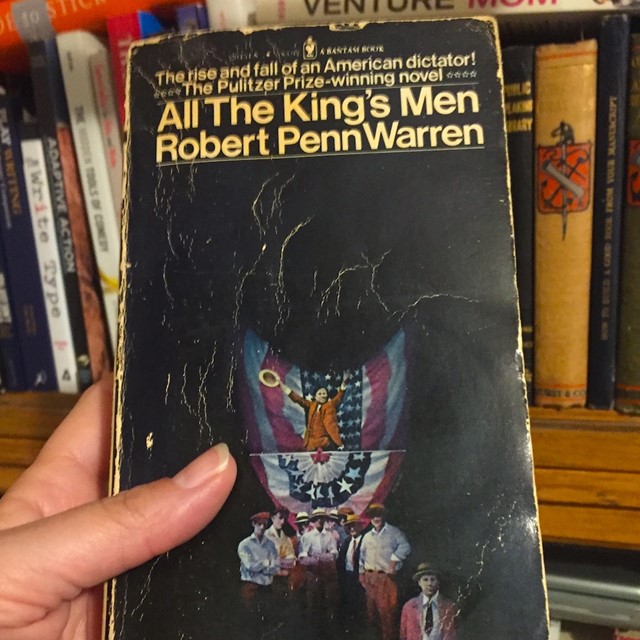 A favorite question in every class we lead is this: What public speaking books do you suggest we read? Our shelves are loaded with choices. Every month we'll be featuring a pick from new books we've come across and old favorites we go back to again and again. Above, Jenny Maxwell's copy of "All the King's Men" from a college course, Survey of Southern Literature, she took at UNC-Greensboro.

"I'm not going to read you any speech. You know what you need better'n I could tell you."

– Willie Stark giving a stump speech in "All the King's Men"

All the King’s Men

"When people ask me for my favorite books about public speaking, this is always one of the first to come to mind—even though it’s a novel," says Buckley co-director Jenny Maxwell.

It’s the scenes of Willie Stark making speeches, Jenny says, that make this a good read for public speakers.

Robert Penn Warren’s novel follows the rise and rule of Willie Stark, The Boss, who starts as a naïve, earnest, and idealistic candidate and becomes an opportunistic and corrupt master politician. His skills as an orator reflect his transformation as a character.

"The Boss is already governor when he makes a speech in the first chapter. The whole time, he's telling the crowd ‘I’m not making any speech.’ The description of his this-is-not-a-speech speech shows how to captivate a crowd using vocal variety, timing, eye contact, personal connections to the audience, and so much more. And that’s just the first example,” Jenny says.

Stark wasn’t always confident and able to delight an audience. In one of the book's early chapters, narrator Jack Burden takes you back to Stark's early campaigning days:

Nobody would listen to the speeches, including me. They were awful. They were full of facts and figures he had dug up about running the state. He would say, “Now friends, if you’ll bear patiently with me for a few minutes, I will give you the figures,” and he would clear his throat and fumble with a sheet of paper and backbones would sag lower in their seats and folks would start cleaning their fingernails with their knives.

But once he’s shaken from his innocent point of view about politics, Stark changes his speaking style. Instead of trying to impress the audience with data, he talks candidly about his lowly upbringing and identifies with them. He learns how to move a crowd on an emotional level.

"I first read this novel in college and loved it. But before I started working at The Buckley School, I didn’t give much thought to how public speaking has such a big role in the story. Now when I re-read it, that element stands out,” Jenny says. “And I have to add, our last presidential campaign and the speaking style of the current president sent me back to read this book again just recently, really paying attention to how Willie Stark uses speeches to stir up the crowd."

Here’s an article that gives some insight into the speaking styles of both Willie Stark and Huey Long, the real-life governor who inspired the character.