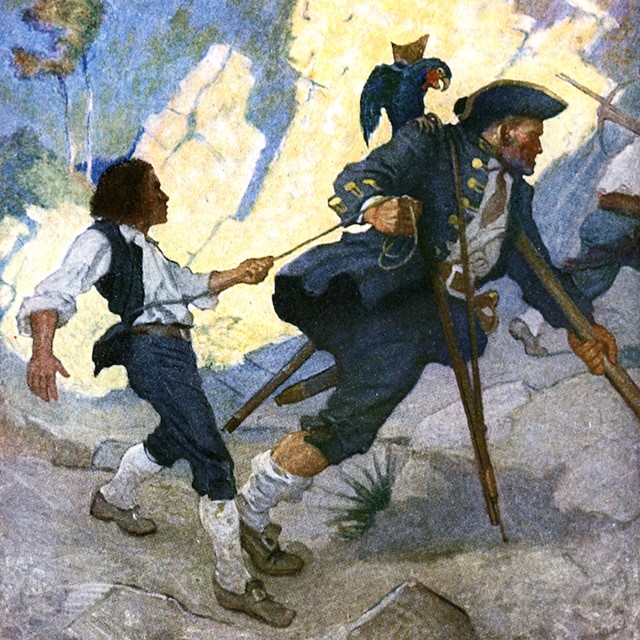 The Buckley School's founder believed that all speakers should hone their presentation skills by reading poetry out loud. We keep that worthwhile practice alive by including a poem in our magazine each month for you to read aloud. (The image above is not of our founder and his pet bird but of Long John Silver and his parrot Captain Flint as imagined by N.C. Wyeth.)

Some poets and critics have dismissed him, yet Robert Louis Stevenson continues to be one of the most translated authors of all time.

Though only 44 years old when he died, he accomplished so much—writing Treasure Island, The Strange Case of Dr. Jekyl and Mr. Hyde and 11 other novels, The Child’s Garden of Verses, plus many more poems, short stories, and travel memoirs.

The son of a lighthouse engineer, Stevenson was not content to take up that career. Instead, he studied law--then traveled almost as much as he wrote. After touring Europe as a young man, he later left England, crossed the U.S., then sailed the Pacific, stopping for a while in Hawaii before settling on an island in Samoa. He purchased a 400 acre tract there and took the Samoan name Tusitala, which means “teller of tales.” He collapsed one night while opening a bottle of wine and died a few hours later, most likely from a cerebral hemorrhage.

Here’s his short poem about long summer days for your July read aloud:

In winter I get up at night
And dress by yellow candle-light.
In summer, quite the other way,
I have to go to bed by day.

I have to go to bed and see
The birds still hopping on the tree,
Or hear the grown-up people’s feet
Still going past me in the street.

And does it not seem hard to you,
When all the sky is clear and blue,
And I should like so much to play,
To have to go to bed by day?

Here's an interesting video about the challenge of bringing Treasure Island to the stage: