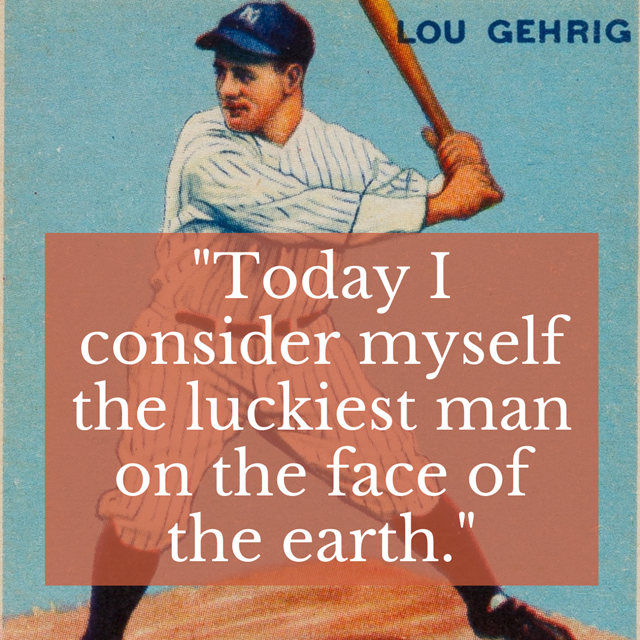 "I may have had a tough break, but I have an awful lot to live for."

It's been 82 years since baseball great Lou Gehrig delivered his simple speech, one that continues to be among the most famous of the 20th century.

Already weakened by ALS, Gehrig was retiring from baseball. His remarks on July 4, 1939 were brief. He used fewer than 300 words, most of them simple ones. Yet his humility of spirit, gratitude, and understatement continue to make it powerful. It's often referred to as baseball's Gettysburg Address.

Was Gehrig speaking off the cuff? How did this reportedly shy man manage his emotions and the spotlight on this day? Here's what we discovered--and what you can learn and apply to your speaking.

Preparation counts - even if you don't use your notes

According to New York Times writer Richard Sandomir, Gehrig had, with his wife's help, worked on his remarks:

Gehrig did not have a written speech to deliver — and no actual copy of it appears to exist. Had he forgotten it in his locker? Had he, after working on it the day before with Eleanor (as she has said), discarded any drafts and decided to deliver it extemporaneously?

Sandomir suggest that the speech was Eleanor's idea, though there was considerable reluctance by Gehrig--who was a quiet man--to give it. The crowd chanted "We want Lou." So he went to the microphone.

There is no exact record of the speech though parts of it were captured on film. Many people think the speech delivered by Gary Cooper for the movie The Pride of the Yankees is the same speech, but the movie speech was created from the memory of Eleanor Gehrig with help from screenwriters.

One thing seems likely, though: The preparation Gehrig did helped him deliver his thoughts that day, notes or no notes. We've seen the same thing happen with speakers we coach. It's like the grocery list you make and leave at home. The act of making the list helps you remember what you need.

Humility of spirit is the essential ingredient

Our founder often said the best speaker is the one who doesn't want to give a speech. That's because he's not in love with the sound of his own voice. He has humility of spirit, Reid Buckley's essential ingredient for greatness.

Compare that to the horrible political stump speeches we hear that begin with "But first, a little about me..."

Understatement can be the most compelling choice

Gehrig opens with the simple statement: Fans, for the past two weeks you have been reading about the bad break I got.

Gehrig was already considerably weakened that day by a disease that would take his life. Yet he called it a "bad break."

As he lists the blessings of his life, he uses repetition of the homely phrase "that's something" to build quietly at last to appreciation for his wife's courage: "that's the finest I know."

We often find ourselves struggling to persuade speakers that simple words can impress audiences. Listen to Gehrig and become convinced.

Here's an article from Gothamist about the story behind the speech.

According to Sports Illustrated, this is a text of the speech.

Here's an interview with a man who was in Yankee Stadium that day and heard Gehrig speak.

Below, footage of Gehrig delivering his farewell to baseball: