Declaration of Organization: Help from a Founding Document 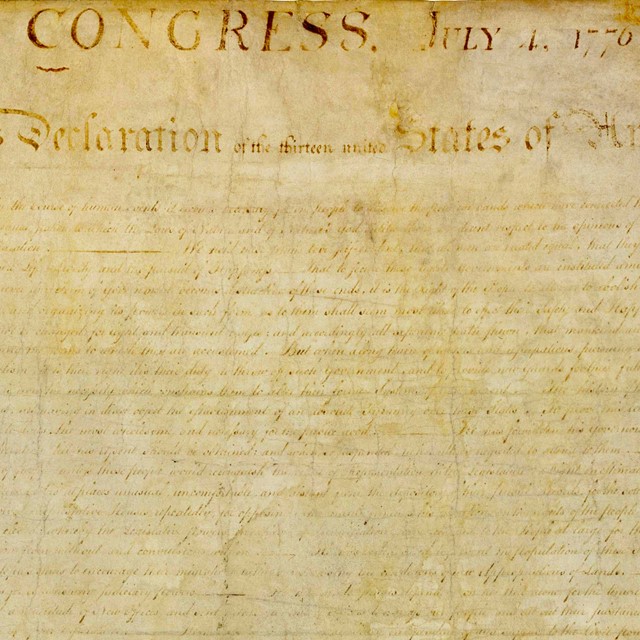 How do you learn to better organize and express your ideas? Practice, of course. But you can find instruction in everything you read and watch, if you start paying attention.

That's a fundamental idea behind our workshops in writing and organizing, one our founder Reid Buckley explores in Sex, Power and Pericles. In that book, Reid scrambles the lines of Martin Luther King's I Have a Dream speech, Abraham Lincoln's Gettysburg Address, passages from Shakespeare--and the Declaration of Independence.

His theory: By putting these back together, you become aware of how they were organized. And this, in turn, helps you be more aware of how other things you read every day are put together, so that you can more deliberately use the same techniques in the work you do.

For each scramble, Reid first paraphrases in more contemporary language. If you'd like to try it, here's a scramble. Write the sentences in the order you think they belong. (Or print this page and number them.)

Once you think you have it unscrambled, scroll down to check yours against the original.

SCRAMBLED--First half of second paragraph:

___Governments get their just powers by consent of the governed.

___Life, Liberty, and the Pursuit of Happiness are rights no human authority may deprive any people of.

___When a government destroys the people’s God-given rights, the People have the right to change or abolish that government.

___The sole reason government was invented was to protect these rights.

___All men are endowed by God with rights which should not be taken from them.

___All men are created equal.

SPOILER ALERT: Scroll past here and you'll find the answer.

(1) Some truths don’t need substantiating. (2) All men are created equal. (3) All men are endowed by God with rights which should not be taken from them. (4) Life, Liberty, and the Pursuit of Happiness are rights no human authority may deprive any people of. (5) The sole reason government was invented was to protect these rights. (6) Governments get their just powers by consent of the governed. (7) When a government destroys the people’s God-given rights, the People have the right to change or abolish that government.

And in the original language:

We hold these truths to be self-evident, that all men are created equal, that they are endowed by their Creator with certain unalienable rights, that among these are life, liberty and the pursuit of happiness. That to secure these rights, governments are instituted among men, deriving their just powers from the consent of the governed. That whenever any form of government becomes destructive to these ends, it is the right of the people to alter or to abolish it...

This weekend, you might hear those famous words coming from your television, in a commercial for Ancestry.com. The company identified 29 direct descendants of the signers and with their help, recreated John Trumbull's famous painting.

Here are Reid's thoughts on Thomas Jefferson's logic behind his organizational scheme:

"He proceeded deductively, that is, from the abstract to the concrete, from his invoking the Supreme Being to the actual condition of the colonies and the specific indignities that they were suffering under a despot king, and he built his thesis using a strict lineal progression.... His intention was to make his argument unimpeachable in its own right...He is preparing to avoid the charge of treason by opposing the allegiance individual human beings owe to their Creator to the allegiance owed by a people to their monarch."

A recent article from Smithsonian magazine offers another take on the Declaration of Independence, making the case that the true audience for it was not the one we've been taught in schools.

And if you're interested in more of Reid's scrambles, you can them along with his discussion of the organization methods used in Sex, Powers, and Pericles: Principles of Advanced Public Speaking. (If you'd like to get your own copy and have trouble finding it, email us--we might be able to help.)