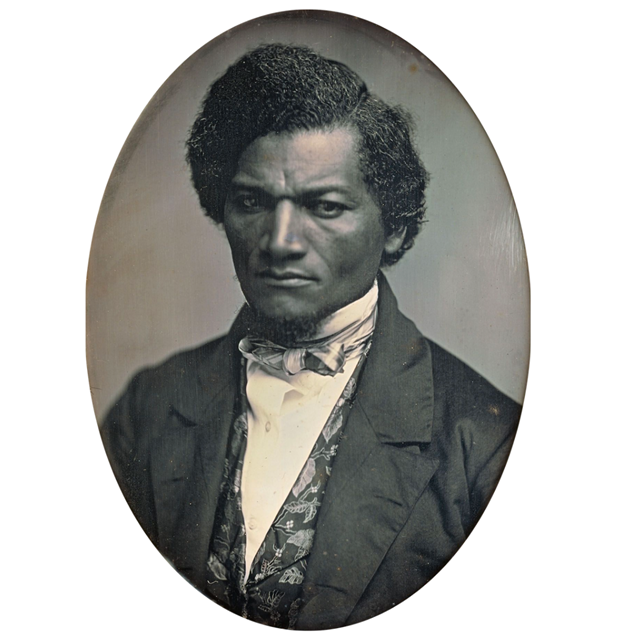 This photograph of Frederick Douglass was taken around the same time he gave his speech on July 5, 1852. He was 32 years old.

"He would use the Fourth of July for its irony over and over and over, just like the Declaration of Independence is used to remind the country of its potential and promise, and to him, race was always the measure of that."

He had been invited to give a July 4th address to the Ladies Anti-Slavery Society of Rochester. Frederick Douglass instead chose to give his speech on July 5th--and used the occasion to put slavery in stark contrast to the freedoms that had just been celebrated the day prior.

"What to the Slave is the Fourth of July?" continues to be one of the most important and most read speeches in American history.

David Blight writes in his recently published biography of Douglass that the message was not a new one for Douglass. But Douglass recognized the Fourth of July gave him a unique opportunity to engage the audience, a way to make his message resonant in a new way.

Blight says Douglass expected a strong response and, in fact, had the speech printed and ready for distribution immediately after he delivered it.

Though Douglass opens by acknowledging the holiday and all it stands for, he makes a sharp turn. Here's the most familiar passage:

I say it with a sad sense of the disparity between us. I am not included within the pale of glorious anniversary! Your high independence only reveals the immeasurable distance between us. The blessings in which you, this day, rejoice, are not enjoyed in common. The rich inheritance of justice, liberty, prosperity and independence, bequeathed by your fathers, is shared by you, not by me. The sunlight that brought light and healing to you, has brought stripes and death to me. This Fourth July is yours, not mine. You may rejoice, I must mourn…

What, to the American slave, is your 4th of July? I answer; a day that reveals to him, more than all other days in the year, the gross injustice and cruelty to which he is the constant victim. To him, your celebration is a sham; your boasted liberty, an unholy license; your national greatness, swelling vanity; your sounds of rejoicing are empty and heartless; your denunciation of tyrants, brass fronted impudence; your shouts of liberty and equality, hollow mockery; your prayers and hymns, your sermons and thanksgivings, with all your religious parade and solemnity, are, to Him, mere bombast, fraud, deception, impiety, and hypocrisy — a thin veil to cover up crimes which would disgrace a nation of savages.

Olivia B. Waxman provides more background and context for the speech in this article for Time.

Actor Phil Darius Wallace performs the speech at Douglass's historic home, Cedar Hill, in Washington on July 4th. Read this article from The Washington Post to get his insights into Douglass's words.

Blight also wrote the introduction to this edition of The Columbian Orator, the book Douglass says set him on his life's course.

Below, you can listen to Ossie Davis read "What to the Slave Is the Fourth of July?"