Frederick Douglass and The Columbian Orator 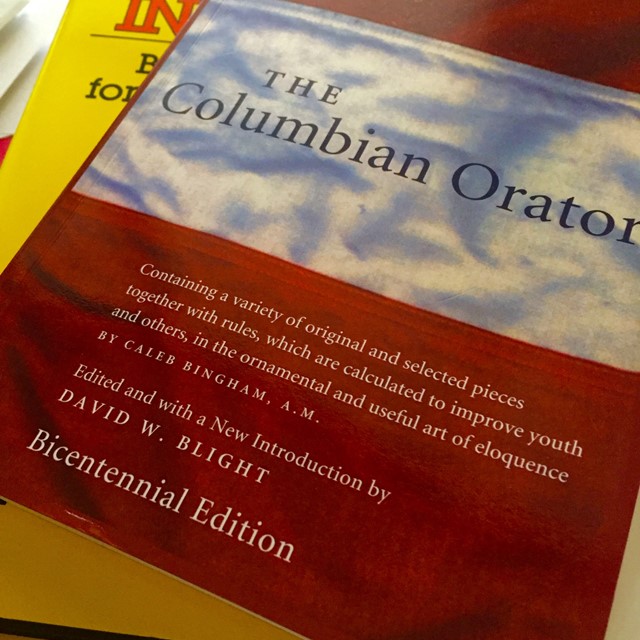 "Every opportunity I got, I used to read this book."

It’s rare, but every once in a while we do work with a speaker who carries a copy of this same book Frederick Douglass is referencing. The book is The Columbian Orator, a collection of essays, dialogues and poetry that was used to teach public speaking during the 19th century.

It’s hard to think of The Columbian Orator and not think of Douglass. In his memoir, he writes about how he learned of the book, then purchased a copy of it:

When I was about thirteen years old, and had succeeded in learning to read, every increase of knowledge, especially respecting the free states, added something to the almost intolerable burden of the thought-" I AM A SLAVE FOR LIFE." To my bondage I saw no end. It was a terrible reality, and I shall never be able to tell how sadly that thought chafed my young spirit. Fortunately, or unfortunately, about this time in my life, I had made enough money to buy what was then a very popular school book, viz: the "Columbian Orator." I bought this addition to my library, of Mr. Knight, on Thames street, Fell's Point, Baltimore, and paid him fifty cents for it. I was first led to buy this book, by hearing some little boys say that they were going to learn some little pieces out of it for the Exhibition. This volume was, indeed, a rich treasure, and every opportunity afforded me, for a time, was spent in diligently perusing it.

Douglass was particularly moved by the entry “Dialogue Between a Master and Slave”:

Invited to the debate, the quondam slave made a spirited defense of himself, and thereafter the whole argument, for and against slavery, was brought out. The master was vanquished at every turn in the argument; and seeing himself to be thus vanquished, he generously and meekly emancipates the slave, with his best wishes for his prosperity. It is scarcely necessary to say, that a dialogue, with such an origin, and such an ending--read when the fact of my being a slave was a constant burden of grief--powerfully affected me; and I could not help feeling that the day might come, when the well-directed answers made by the slave to the master, in this instance, would find their counterpart in myself.

Introducing the bicentennial edition of The Columbian Orator, editor David Blight writes about the book’s contradictory mix of high oration and its attack on aristocratic language. He contemplates how that influenced Douglass—and ultimately suited Douglass’s mission:

Indeed the paradox at the turn of the nineteenth century between democratic and aristocratic eloquence eventually produced no greater product than Douglass, the slave who rose from below, mastered his masters’ language, and spoke to America as no one else ever had about how the country might reinvent itself if it could imagine a way to destroy slavery.

Look here for a collection of Douglass’s speeches and here to learn about the annual Frederick Douglass oratory competition for students.

You can find The Columbian Orator digitized here.