Books for Speakers: A biography and a memoir 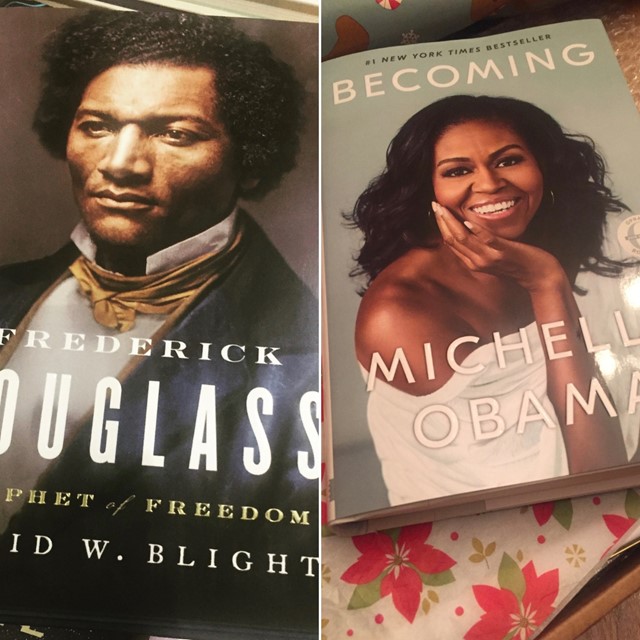 A favorite question in every class we lead is this: What are the best public speaking books? What do you suggest we read? Our shelves are loaded with choices. Every month we'll be featuring a pick from new books we've come across and old favorites we go back to again and again.

"Douglass spoke to America as no one else ever had about how the country might reinvent itself if it could imagine a way to destroy slavery."

– Douglass biographer David Blight in the introduction to "The Columbian Orator"

We’re taking a little different tack this month, featuring two books that a) aren’t specifically about speaking or writing and b) are books we have yet to read.

That said, on our Christmas wish list and on our holiday reading list are the new biography of Frederick Douglass and Michele Obama’s memoir. We’re eager to learn more about the lives of both, because of their impressive public speaking talents.

We’ve written before about Douglass and how one book, The Columbian Orator, set him on his life’s course. David Blight wrote the introduction to our edition of that book. As you can see, he's also this new biography’s author.

Michele Obama has wowed us with her public speaking on many occasions and at the school. We frequently talk about the beautiful speech she gave at the 2016 Democratic National Convention.

Of course, that speech provided one of the most memorable lines in recent history. But it’s her story of the day she sent her children to school that sticks with us, because of the simple language, relatable emotions, and vivid detail:

I will never forget that winter morning as I watched our girls, just 7 and 10 years old, pile into those black SUVs with all those big men with guns. And I saw their little faces pressed up against the window, and the only thing I could think was, "What have we done?"

Will we find clues to how these two became skilled public speakers? Stay tuned…and if you’ve read either and care to weigh in, we’d love to hear what you discovered.