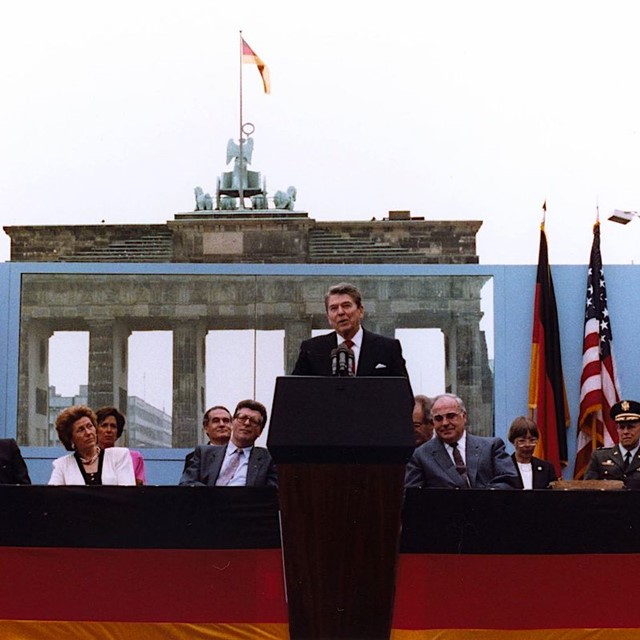 Two American presidents, two speeches separated by 24 years. In the month of June, John F. Kennedy and Ronald Reagan spoke in Germany's capital city. Both speeches are remembered for famous lines--as each man called for a removal of the Berlin Wall.

June 1963: A German phrase and an urban legend

President Kennedy gave his famous "Ich bin ein Berliner" speech on June 26, just 22 months after Soviet-controlled East Germany had put up the Berlin Wall to keep their citizens from escaping to freedom in the West. The speech, delivered to an estimated crowd of 450,000 people, is one of the most famous from the Cold War period and considered one of Kennedy’s best.

Historian Andreas Daum reports that Kennedy had considered a number of phrases, even entire paragraphs in German for that speech. But his team, including speechwriter Ted Sorensen, determined that extensive use of German would be a mistake. They settled on two German phrases, spelled out phonetically in Kennedy’s text.

Even as he spoke it, Kennedy is said to have been uncertain of how the line would be received:

"We can look forward to that day when this city will be joined as one...when that day comes, as it will, the people of West Berlin can take sober satisfaction in the fact that they were in the front lines...all free men, wherever they may live, are citizens of Berlin, and therefore, as a free man, I take pride in the words 'Ich bin ein Berliner.'"

Daum writes that as the audience’s positive response unfolded, "Kennedy, who fiddles a bit with his suit jacket, is grinning like a boy who has just pulled off a coup."

Despite Kennedy's attention to carefully delivering "I am a Berliner," speculation emerged that by including "ein" in the phrase he’d actually said "I am a jelly doughnut."

A Berliner is a type of jelly doughnut-like pastry popular in some West German areas. The story first appeared as a scene in a novel but was repeated as fact by some news organizations. There's no evidence the audience interpreted Kennedy's words that way.

There was little media coverage of Reagan's address and for a long time it didn't receive much notice. The Soviet news agency Tass claimed Reagan gave an "openly provocative and war-mongering speech." It wasn't until the wall collapsed two years later that people started viewing Reagan's line as inspiration for the event.

Speechwriter Peter Robinson, who coined the phrase "tear down this wall," recalled that the State Department and the National Security Council disapproved of the expression. He was still working on a draft the morning Reagan was to give the speech.

In an article for the National Archives, Robinson writes about his experience:

"Mr. President," I said, "I learned on the advance trip that your speech will be heard not only in West Berlin but throughout East Germany." Depending on weather conditions, I explained, radios would be able to pick up the speech as far east as Moscow itself. "Is there anything you'd like to say to people on the other side of the Berlin Wall?"

The President cocked his head and thought. "Well," he replied, "there's that passage about tearing down the wall. That wall has to come down. That's what I'd like to say to them."

I spent a couple of days attempting to improve the speech. I suppose I should admit that at one point I actually took "Mr. Gorbachev, tear down this wall" out, replacing it with the challenge, in German, to open the Brandenburg Gate, "Herr Gorbachev, machen Sie dieses Tor auf."

"What did you do that for?" Tony [Griscom] asked.

"You mean you don't get it?" I replied. "Since the audience will be German, the President should deliver his big line in German."

"Peter," Tony said, shaking his head, "when you're writing for the President of the United States, give him his big line in English." Tony put "Mr. Gorbachev, tear down this wall" right back in.

On the way to the wall, the President insisted that the line remain, saying, "the boys at State are going to kill me, but it's the right thing to do."

Lessons to apply to our public speaking

While you may not be giving an important speech calling for greater freedoms and an end to the Cold War, you can still apply some ideas from these speeches to your presentations:

To see Regan's full Berlin Wall address (which he opens with a reference to Kennedy's speech), go here.

For more on the jelly doughnut urban legend, read this article from Smithsonian Magazine.

Below, watch Kennedy delivering his famous German line--and using a bit of humor about the translation: