Michelle Obama: When They Go Low 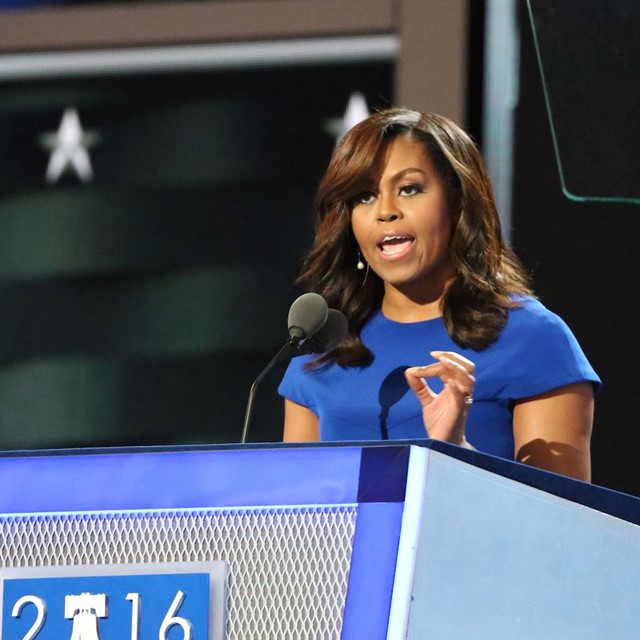 Michelle Obama speaking at the Democratic National Convention on July 25, 2016. (Photo by Voice of America)

It may be the most quoted line from a speech this decade.

Michelle Obama gave the speech that contained it in July 2016, at the Democratic National Convention in Philadelphia—and it includes more than one passage that has stuck with us.

The Power of Simple Words

In an article for The Washington Post, Michelle Obama's chief speechwriter—Sarah Hurwitz—talked about the process of crafting a speech in collaboration with her boss.

One thing that's clear: Obama isn't interested in using jargon, fancy quotes, or a wagonload of data. Instead, she wants to get to the heart of issues and express them in simple language.

Another White House speechwriter, Tyler Lechtenberg, described Obama's approach to speeches this way: "She really wants to connect and to be sure there's an emotional center in every speech."

You'll note that the line "When they go low, we go high" consists of seven one syllable words. It gets some of its sticking power from the way it's constructed, an example of the rhetorical device antithesis.

This is common advice to speakers and writers: show don't tell. It's not always so easy to do. Obama's speech is full of moments that show us, with scenes and concrete details.

A striking moment in her speech is the image she painted to show us the fears of two parents. Talking about her daughters and their transition to the White House, she said:

"When they set off for their first day at their new school, I will never forget that winter morning as I watched our girls, just 7 and 10 years old, pile into those black SUVs with all those big men with guns.

And I saw their little faces pressed up against the window, and the only thing I could think was, what have we done?"

Another portion of that speech we can't forget is the way she talked about her place in U.S. history in such a concrete way:

"That is the story of this country, the story that has brought me to this stage tonight, the story of generations of people who felt the lash of bondage, the shame of servitude, the sting of segregation, but who kept on striving and hoping and doing what needed to be done so that today I wake up every morning in a house that was built by slaves."

The Case for Preparing

As much as we admire the words in this speech, we also appreciate the outstanding delivery. And we're pleased to read that Obama puts in the time and thought there, too.

According to The Washington Post: "Michelle Obama has been known to practice big speeches word for word, weeks in advance, and rarely orders last-minute changes."

Read this story about Michelle Obama's speechwriter and how they work together, from The Washington Post.

Here are Sarah Hurwitz’s tips for crafting a great speech—and we agree with every word!

For a transcript of Obama's convention speech, look here.

Below, video of Michele Obama speaking at the Democratic National Convention in 2016: