Rhetorical Device of the Month: Antithesis 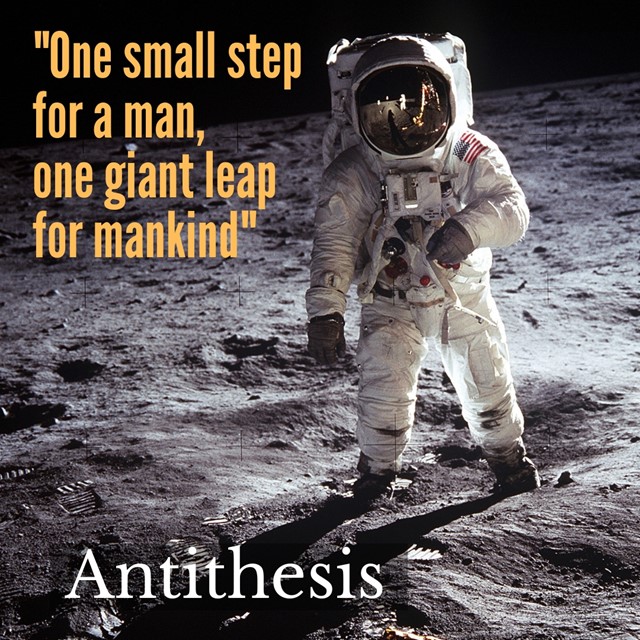 By JENNY MAXWELL AND JANA DALEY

"The sunlight that brought light and healing to you has brought stripes and death to me."

– Frederick Douglass, using antithesis in his powerful anti-slavery speech, "The Meaning of the Fourth of July to the Negro"

Antithesis is not opposition to creating a thesis as part of an academic program, though we sympathize if you are, in fact, anti-thesis in pursuit of that master’s degree.

Pronounced ann-TITH-uh-sis, the word comes from the Greek for "set against." As a rhetorical device, antithesis is defined very specifically as the use of:

3) in the same sentence

The effect is to heighten the contrast—and in many cases, vividly drive the speaker’s point home.

To see how those effects work, consider these uses of antithesis in famous speeches:

"We must all learn to live together as brothers—or we will all perish together as fools."

-Martin Luther King, Jr. in a commencement address at Oberlin College in June 1965

"I know not what course others may take: but as for me, give me liberty or give me death."

-Patrick Henry, in his speech to the Second Virginia Convention, 1775

-Michelle Obama, speaking at the 2016 Democratic National Convention in Philadelphia

Frederick Douglass’s powerful speech, "The Meaning of July Fourth for the Negro," is built on juxtaposition. He delivered it on July 5, 1852 to the women of the Rochester Anti-Slavery Sewing Society--and in that speech you’ll find a number of striking examples of antithesis. Here are two:

"The sunlight that brought light and healing to you has brought stripes and death to me."

"To him, your celebration is a sham; your boasted liberty, an unholy license; your national greatness, swelling vanity."

Summarizing why a speaker (or writer) might choose to use antithesis, LitCharts writes it can:

We’ll add that antithesis makes a point memorable—and quotable—as we’ve seen recently with the line "When they go low, we go high" and in the not-so-distant past with Neil Armstrong’s "one small step for a man, one giant leap for mankind."

Below, watch and listen as Armstrong says it himself, setting foot on the moon for the first time. And if you're interested in the controversy over whether he said "a man" or merely "man," you might enjoy this article.