Books for Speakers: Orators of the American Revolution 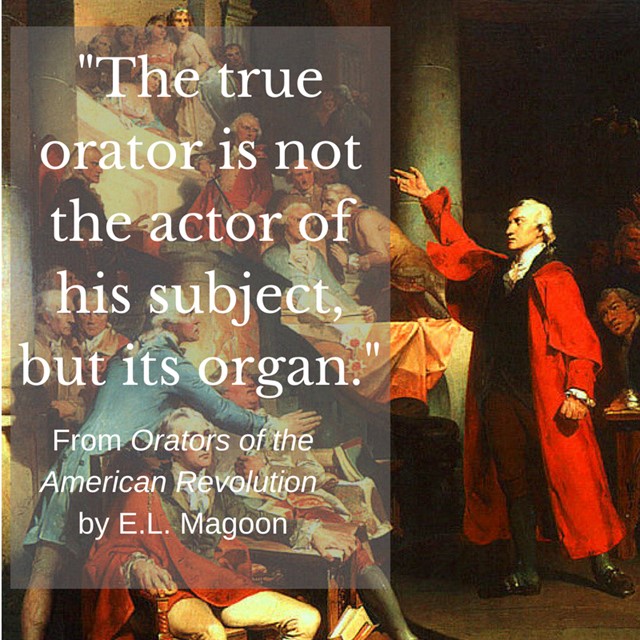 A favorite question in every class we lead is this: What public speaking books do you suggest we read? Our shelves are loaded with choices. Every month we'll be featuring a pick from new books we've come across and old favorites we go back to again and again.

"Every eye yet gazed entranced on Henry. Men were beside themselves.”

Orators of the American Revolution

This book comes to our attention by way of school co-director Jenny Maxwell, who found it, she says, at Ed’s Editions, one of her favorite bookstores for interesting old books.

In his preface, E.L. Magoon writes:

Our leading speakers, in Colonial and Revolutionary times, were distinguished not more for their general ability, than for the wonderful originality of talent with which each in particular characterized.

“I’m not sure how much stock I put in the accuracy of his details about each person. What strikes me is that the things he finds impressive in an orator then are many of the same skills we teach today,” says Jenny. “So it’s worth a look for that, if nothing else.”

Magoon was a pastor who wrote several books on oratory. Among qualities he notes in the speakers of the American Revolution are these still-relevant ones:

“The first time I opened the book,” Jenny says, “I went for the chapter about Patrick Henry, wondering about the speaking style of the guy who gave us ‘Give me liberty or give me death.’”

Here are excerpts from Magoon’s chapter on Patrick Henry:

The true orator is not the actor of his subject, but its organ. With him who has something to say, under the importance of which he trembles, and is anxious to disburden his soul in the most direct and forcible manner, there will be no hollow wordiness, no gaudy decoration, no rhetorical sophisms, but a profound and manifest feeling of truth and honesty will gleam all over the speaker’s persona and fork the lightings of his eloquence.

He was the incarnation of the Revolutionary zeal. He had absorbed into his susceptible nature the mighty inspiration which breathed throughout the newly awakened and arousing world.

Henry exercised tremendous power of the people, because he was one of them—had studied their character—was familiar with their habits of thought and action—had gained their confidence and could conciliate their prejudices.

If you’re interested in reading more of Magoon’s take on the Revolutionary orators, you don’t have to rely on finding an old edition. You can download it for free here.

For another take on the Patrick Henry speech and what made it so remarkable, see this article.

Buckley School founder Reid Buckley also used the Declaration of Independence as a vehicle for discussing effective organization. You can find our article on that here.