How To: Manage Uhs and Ums 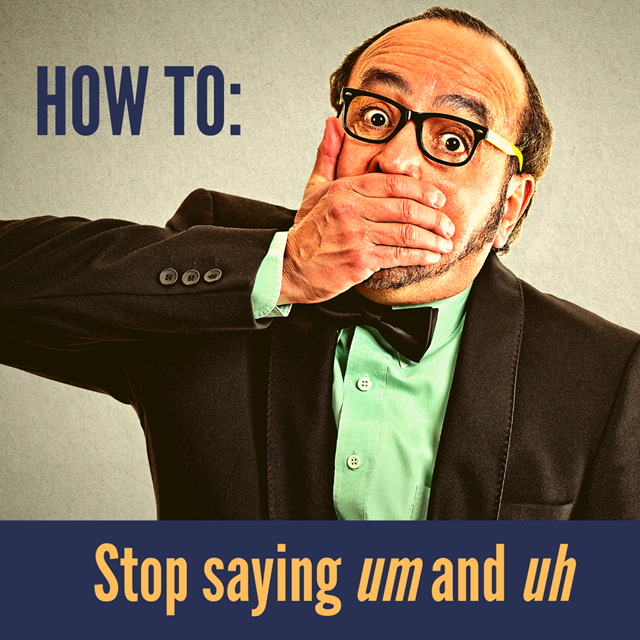 "Targeting um and uh themselves does not solve the problem. They are merely symptoms. If we are going to minimize our use of fillers, and benefit from the impression of control and authority that this gives, we should understand the good reasons why these conversational traffic signals exist."

– Linguist N.J. Enfield on the whys and hows of filler language

One of the most frequent requests we get as a public speaking school is this one: Help me stop saying uh and um.

Filler words and sounds exist for a reason. They help us keep the floor in conversation while we think of our next words.

In speeches, presentations and media interviews, though, if used a lot they become a problem.

You know that, of course. Someone has probably driven you nuts with their steady stream of uhs and ums. You find yourself zeroing in on the repetitive thud of the filler instead of the substance in between.

As with most elements of public speaking, there is no magic button. But there are steps you can take to rein in the uh-uh-umming:

1. Become painfully aware you have the habit.

Some speakers have no idea how much they rely on filler sounds. Others have an inkling but don't grasp the size of the problem.

Some speakers need a way to feel their audience's pain. At the school, we use the "dread bucket" to make the point, dropping a large marble into a metal pail every time the speaker says uh or um.

You can also try less unsettling methods each time the speaker makes a filler sound:

Some people, once they're made aware, are able to instantly drop them from speeches. Most speakers have to work a bit harder, though.

2. Remove them from your everyday conversations.

One way to reduce your reliance on filler sounds when you're under pressure is to get out of the habit of using them when you talk casually to family, co-workers, and friends.

Cut it out altogether. Buckley coach Jenny Maxwell says this has helped her more than anything else she's done.

Here are some other tips for minimizing filler we've heard that make some sense--and also happen to be good public speaking advice in general:

3. Practice public speaking with a focus on pausing instead of saying uh or um.

One of the best replacements for an um or uh in a speech is nothing—as in, silence.

Speakers are often much better off pausing silently to collect their thoughts, because those pauses can add some suspense or allow the audience to think about what’s been said and keep up.

Silent pauses also add to a presenter's appearance of ease and control. As we often point out at the school, only the confident speaker is comfortable with silence.

4. Accept that a few won't kill anyone. Know what's okay and what needs to go.

Most languages have their filler sounds. Most speakers use a few. One study by linguists found that, on average, American speakers of English use two to three filler words per minute.

Linguists have also found that filler use is higher among younger people and is different between men and women. If you find that fascinating, you can read more here.

While we're all for reducing filler, we are not that concerned about an um or uh once a minute. We’re much more concerned about the speaker who adds filler multiple times in a sentence or who starts every sentence with uh or um.

So how do you know when it's too much? First, scroll up and see Step 1. Then, in general, we urge speakers to:

5. Cultivate the artful use of the uh or um.

Sometimes, an uh or um can be useful, expressive, even downright charming:

The key is to be deliberate—to have control of the sound—not use it without awareness or drop it in by default.