Speaking in Public: Writing to be Heard 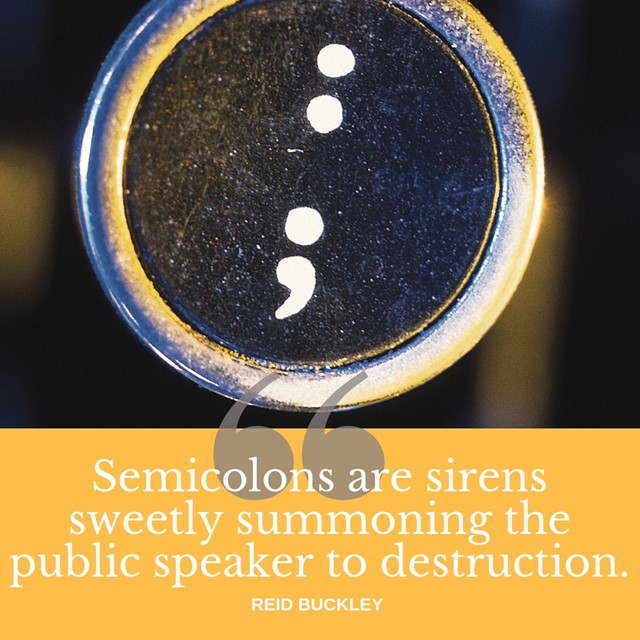 Thirty years ago, The Buckley School launched its flagship program and our founder Reid Buckley published his first book on public speaking. To mark the anniversary this year, we’re featuring public speaking tips and instructional excerpts from that book—"Speaking in Public: Buckley’s Techniques for Winning Arguments and Getting Your Point Across," with the occasional faculty note.

"Semicolons can be lifesavers, giving the reader the chance to come up for air, but they are sirens sweetly summoning the public speaker to destruction."

Writing to be Heard

There are dillies in this book of latinate construction, begging for editorial scissors—I know.

He who doeth not what he preacheth apologizes for a Baroque temperament that he cannot at this late date reform, nor wishes to.

He severely disciplines that temperament when drafting a speech.

Practice constructing straightforward declarative sentences: you know, those lovely, simple, uncomplicated sentences that begin with a subject, progress with a snappy verb, and concluded in a short predicate.

Do not try to say too much in a single sentence. Chop it up. Snip it into two or three parts, each a sentence. Keep your sentence structure uncongested. Relative clauses are to be used sparingly.

The Siren Call of the Semicolon

Semicolons can be lifesavers, giving the reader the chance to come up for air, but they are sirens sweetly summoning the public speaker to destruction.

Anything that in prose writing might append itself to the main thought of a sentence in the form of a semicolonar development should be uttered from the platform with a pause accorded to a new sentence—often, the audience should be reminded of the principal thought, or the subject, by a repetition of it.

This takes longer. It is discursive. A speech cannot cover the same ground as an essay in anything like the same period of time, which one must keep present in preparing the text for a talk.

Converting Written to Spoken: An Example

Let’s try an example requiring close attention from the audience—one that cannot be put simply.

Brain can be weighed and measured, a material organic substance that is subject to laboratory analysis; the synaptic leaps that constitute the imaginative daring of mind, however, are beyond quantification, the process by which they occur being susceptible to description only, the phenomenon that actually takes place remaining beyond empirical understanding.

The brain can be weighed and measured [use both hands, palms up and cupped, fingers slightly furled—figuratively weighing the gray matter], a material organic substance that is subject to laboratory analysis. What goes on in the brain [point index finger at side of head, just above ear], however when thought occurs—the electro magnetic synaptic leaps we make when we jump from one thought to another [pause], when we deduce from observed data [pause], or when our minds suddenly go click! [snap fingers of one hand] with an inductive perception—these little mental miracles are beyond quantification. That is, though our laboratory instruments can record the brain’s mechanical activity, the conceptual processes—how suddenly a genius like Albert Einstein leaps from what is know to a theory of relativity never before conceived—is beyond scientific ken.

The audience will better absorb this longer version of the same major thought than the tighter version, which is why speeches rarely read well.*

*Two thoughts from Buckley faculty: 1) We’d further simplify the “spoken” version, because sentences are still too long and 2) We think a simple writing style reads well but do encourage speakers to use repetition and sentence fragments that might not cut it in a written document.