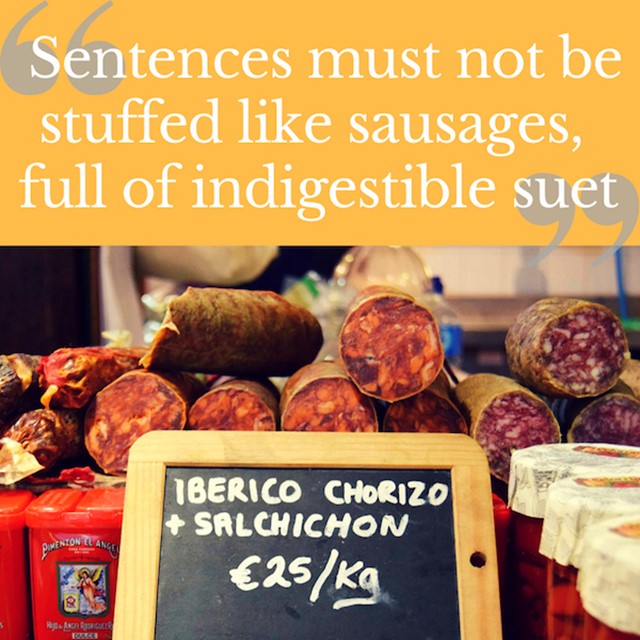 How to Stop Slaughtering the English Language

Practice constructing straightforward declarative sentences: you know, those lovely, simple, uncomplected sentences that begin with a subject, progress with a snappy verb, and conclude in a short predicate.

Do not try to say too much in a single sentence. Chop it up. Snip it into two or three parts, each a sentence.

There are dillies in this book of latinate construction, begging for editorial scissors—I know.* He who doeth not what he preacheth apologizes for a Baroque temperament that he cannot at this late date reform, nor wishes to. He severely disciplines that temperament when drafting a speech.

The Use of Redundancies (in Moderation)

If good writing is lean writing, a good speech is even more severely to be trimmed of fat, but not necessarily of redundancies.

Filling the spoken sentence with too many adjectives and adverbial phrases muddies the message, wearies the tongue, and stuffs the auricular passages of the audience with wax. On the other hand, though never to be treated as dumb, audiences can be assumed deaf.

The message must be repeated, not larded. To this end, qualify thoughts sparingly, but do not stint on mnemonic rhythms and quasi-soritical constructions:

"What this country yearns for is an ideal; and the ideal this country so desperately desires is not romantic, not vainglorious, nor inflated—beyond our reach. To the contrary! The idea this country demands and can attain, and that tonight I propose to you, my fellow citizens is…"

This may sound like the exordium of a perfectly excruciating political pitch. I agree, but it illustrates what I am getting at.

"The message must be repeated, not larded."

– Reid Buckley making the distinction between useful repetition and wordiness

One Thought to the Sentence

Just as sentences must not be stuffed like sausages, full of indigestible suet, do not jumble different thoughts within the same sentence.

"The reason traffic in drugs is so difficult to suppress, apart from a demand that grows exponentially with the degree of addiction, and the malignant influence of acid rock music on your young people, which is far from being a thing of the past, not to mention their rebelliousness and the peer pressure they may be feeling the weight of…"

Do you know where this speaker is going?

The audience becomes pent with a kind of breathless despair, hoping the fellow up there will get back on track, miserably suspecting that the entire talk will be much of the same, its major themes if any exist, impossible to extricate from the disorganization.

Ridding the Text of Dead Wood

Straighten out the syntax, clean each sentence of nonessential modifiers, establish the pecking order of thought, containing each in its separate sentence, and jettison useless baggage.

Never say, “The question as to whether. Say plain, “Whether.

Never say, “There is no doubt but that.” Say plain, “no doubt” or “doubtless.”

What this boils down to is: Don’t be rhetorically pompous. Be simple. And pull the plug on sententious fillers like "the fact that." Just don’t use that awful phrase.

*We may have taken our editorial scissors to this excerpt, ever so lightly. If you'd like to compare this to the passage in the book, send us an email and we'll be happy to provide you with a copy.