Presentation Advice: The Case for the Simple Word 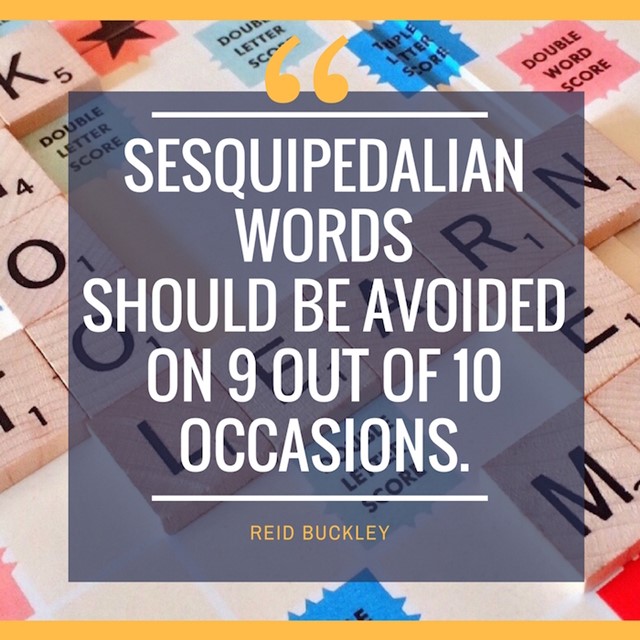 From Chapter 9: The Silver Tongue

Don’t let on to the military, or to the gummint, or to the gnomes who write instructions for computer programs, but the purpose of language is communication. The elementary condition of communication is precision. This is why there are grammatical rules. And this is why words mean what they mean, and should be used with care and respect. Learn to watch your language.

Fancy, sesquipedalian words—like the six-shooter I’ve just fired off—should be avoided by speakers on nine out of ten occasions (The tenth occasion is when one has acquired a foot and a half in one’s mouth.) This is a member of the Buckley clan telling to you keep your vocabulary simple when you are delivering a talk.*

Every speaker is inherently in the business of education, true, but the field is not semantics, or philology, nor etymology. Leave that to literary types. You want to be down to earth. You want your audience to understand just exactly what it is you wish to put across.

This does not require you to be banal, or dull; it does not proscribe you from those grace notes that lift your talk from the pedestrian level.

But when it comes to words, even when you may boast an intimidating magazine of exotic language that pains beyond mortal ken to keep to yourself, short, pithy, homespun vocabulary should be your choice. If there are two words that will do the job, strike out the longer one.

Had President Roosevelt on that solemn occasion told the American people that we had nothing to fear but phobophobia, would he have carried half the country?

Exceptions to the Simple Word Rule

Sometimes the common word will not do. Sometimes eradicating fancy expressions from one’s style and extirpating ponderous words from one’s lexicon is more expressive than merely cutting it out.

Do not use words you are not thoroughly familiar with and don’t take words for granted, because they can bite you.

For this reason, never use a thesaurus. It promotes bad habits. It encourages one to employ words with which one has no previous acquaintance, which means that one is likely to use them incorrectly.

Words are like a well-beloved tool, or a shotgun, or that putter you’ve had since you were twelve years old that you can't face the links without; they must become old friends before they are handled well.

*Reid also advocated for short sentences in speeches--a rule he tends to ignore when writing about public speaking.

**In the sentence just prior to this chapter, Reid had written this about puns: "Of the pun no more need to be said than that it is a poor weapon to rely upon."