Star Wars and the Force of Simple Words 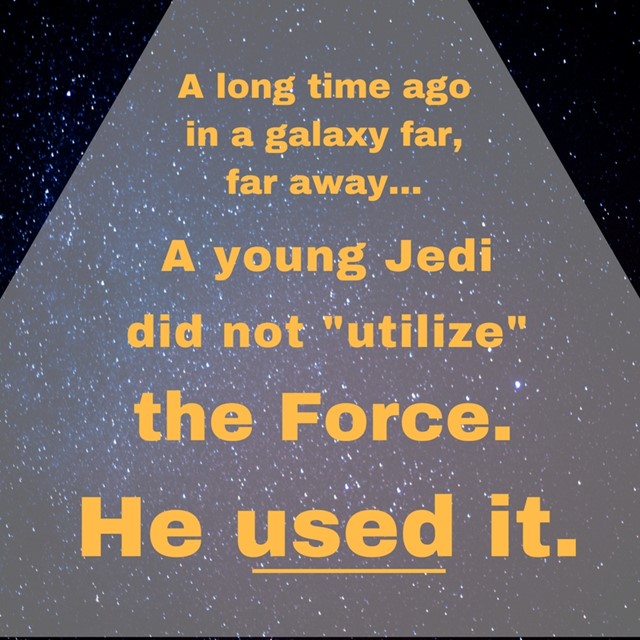 “This very grounded use of language plays a big role in giving Star Wars a ring of truth.”

– Merriam-Webster on the power of plain words

At The Buckley School, we press for use of simple words in our writing, presentation and public speaking classes.

It’s not always an easy sell.

We say: You'll sound more convincing. More like a real person. You'll be easier to understand.

Students frown. They've worked hard to build ginormous vocabularies and want to show them off. What if people take them less seriously when they sound less fancy?

We do our best to bring them around, even as we grapple with that famous Buckley fondness for fancy words.

The Luke Skywalker of plain talk

We often feel a bit like our hero, Sir Ernest Gowers. After he wrote Plain Words to untangle Britain's bureaucratic language, he faced his own raft of doubters.

One was grammarian G. H. Vallins, who took the position that Gowers’s "cult of 'plain English'" stripped communication of nuance. Vallins argued that a phrase like "evacuated to alternative accommodation" had meaning that was erased by Gowers’s simple "taken to other houses."

We feel your pain, Sir E.

"I am often accused of an inordinate reliance on unusual words, and desire to defend myself against the insinuation that I write as I do simply to prove that I have returned recently from the bowels of a dictionary with a fish in my mouth."

The power of a five-letter word

So we were excited to see a dictionary (a.k.a. book of big words) explaining how the power of Star Wars derives from simple words.

"Star Wars showed us something that seemed both strikingly original and intuitively right: old and beat-up spaceships and robots along with junk and clutter familiar to anyone who has a garage."

What works visually in the films works for language, too. More from that Merriam-Webster article:

"Stormtrooper taps into terrifying chapters of 20th-century history from its use in World War I for Germany's shock troops and later for Nazi paramilitaries. Bounty hunter comes straight from the westerns that inspired Lucas.

"Death Star, lightsaber, landspeeder, sand people ... the dark side, and Millennium Falcon are made up of familiar parts."

As the article points out, even the most important idea in Star Wars is expressed in a one-syllable, ultra-ordinary word: the Force.

“May the Force be with you.”

Finding your way to the right choice

Remember the Force when you’re tempted to say proceed to the exterior outlets instead of go to the doors or when you’re utilizing a pencil to take notes when you could just be using it.

Of course, there’s a place for the well-chosen big word. Sometimes that word is needed. Sometimes it packs the right punch.

But there’s no reason to discount the power of simple words in your writing, public speaking and PowerPoint presentations--and we expect the latest box office numbers will back us up on that.