How to: Use Gestures in a Presentation 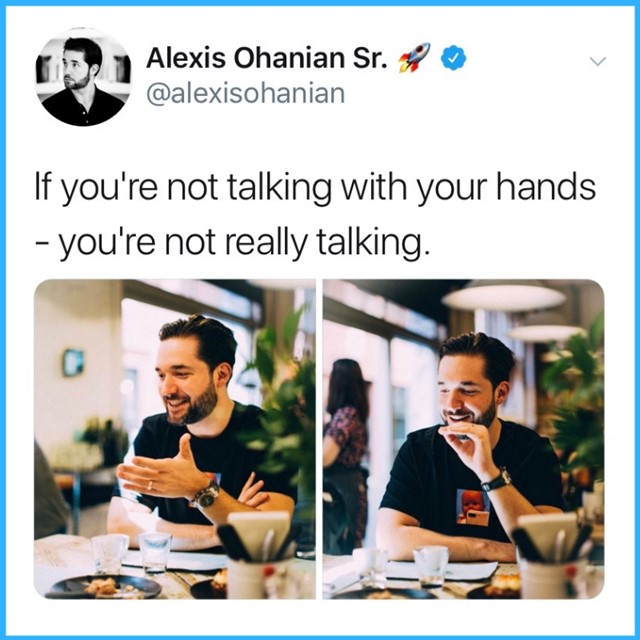 That was a recent tweet from Alexis Ohanian, Reddit co-founder (or as we prefer to think of him, Qai Qai's granddad).

It made us smile. Because we have a lot of students apologize, as if it's a bad thing:

"Sorry, I talk with my hands."

Using gestures is a great idea. They can add a layer of meaning and expression, show your commitment to getting the message across, and make it easier for your audience to follow along.

The key to "talking with your hands" in a presentation is to use gestures for a reason. To know what you’re trying to say. Because with gestures—just as with talking—no one appreciates someone who’s babbling on nonstop.

Here's how to to approach gestures for public speaking:

Step 1. Find a neutral place for your hands to rest comfortably.

If you're using a lectern, grasp the lectern on either side. If you’re standing at the front of the room, you can let your arms relax naturally by your sides.

A comfortable resting position will make you appear confident, more at ease, less nervous—even when you are not feeling any of these things.

Step 2. Use your gestures to create pictures.

The best way to get your hands and arms into the act is to use them for a reason. Did profits rise over the last quarter? Then you can lift your hand up to show it. Do we need to work together? Perhaps you can reach out to the audience then pull your arms in.

The best-looking, most helpful gestures:

Whether you're rehearsing a big presentation or speaking off the cuff, reflect on these:

There's no rule for how much (or how little) to gesture. This is part of the art of public speaking—and depends on factors that include tone, subject matter, where you’re speaking, and your personal speaking style.

We say: If you feel like a flight attendant delivering the pre-flight safety message, that might be (insert gesture: air quotes) "too much."

This more likely comes into play when you're working from a script. Speakers need to make sure gestures happen at the moment they feel natural. Better to leave it out—even if you've rehearsed it—rather than to throw it in late because you remembered "oops, I was going to gesture with that."

Avoid falling into repetitive gestures, because once an audience spots them, they can’t stop noticing them.

We often see speakers who accordion their hands in and out, pump a hand for emphasis, or roll over one hand in a kind of throwaway motion. A few of these will not ruin you. But when you start to use these over and over, or use them in the same way to punctuate a talk, that pattern will become a distraction (and nuisance) for your audience.

Step 4: Keep hands quiet when not being used for a purpose.

Rather than give in to those repetitive motions or pointless hand flailings, learn to keep hands quiet when they’re not adding to the conversation.

Hands can go to that neutral place you identified in Step 1. That way, when you gesture for a reason, the message won’t be lost on your audience.

Our regular reminder to students: You wouldn't highlight every line in a textbook, because that defeats the purpose of highlighting. Likewise, when hands move nonstop, you make it hard for the audience to read the gestures that have something to say.

Feeling reluctant to gesture? Try three basic moves that work for nearly every type of speaker.

Are your gestures right-sized for you and the room? See how you create tone when talking with your hands