Speaking in Public: How to Use a Lectern 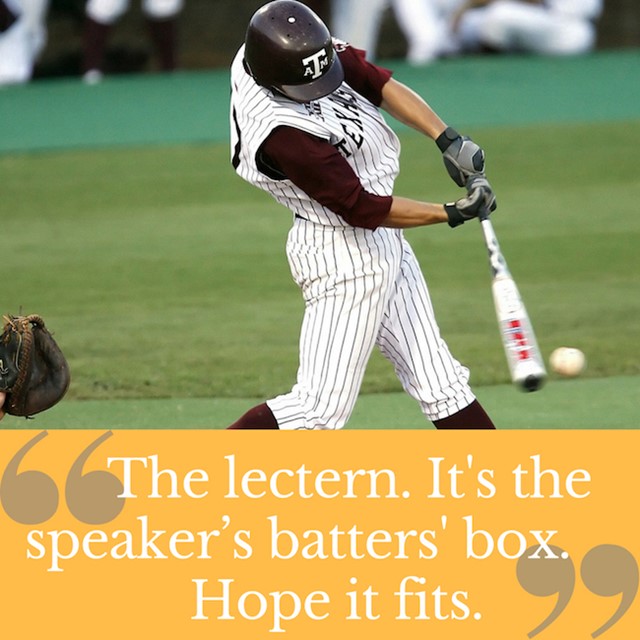 When the audience is large or the situation is formal, you may find yourself speaking from a lectern. While using one may be a requirement (because that’s where the microphones are located, for example), it can also be a huge advantage for a speaker, when used to its best advantage.

Reid Buckley had a career’s worth of advice on how best to work from a lectern. Here are just a few of his thoughts:

From Chapter 10:
A Grab Bag of Useful Tips

The podium is the elevated platform or stage on which a speaker performs; the lectern is the stand on the podium that one speaks at. This is the speaker’s batters' box. Hope it fits.

Take command of it. The lectern is the speaker’s redoubt. It is his quarterdeck, his bully pulpit. Approach it confidently and grasp it with both hands. It’s yours.

Don’t hang on to it as though for dear life, however. Don’t plump one elbow down on its surface and lean on it so hard that the audience may be tempted to swipe one’s elbows off just to see if the whole scaffolding of the body will come down.

Tall people: pray that you are lucky enough to get a tall lectern or one whose height can be adjusted. If it is too low, the tall person’s tendency to stoop is irresistible; and if the tall person’s eyesight is less than 20-20, he will be at pains to read his notes.

Short people pray for a lectern that does not cover them up to their throats. Some are obliged to step up on stools. Such perilous footing is never a good idea. The inconvenient alternative, which is not always an option, is to stand beside the lectern.

Academics counsel that one should not fuss around at the speaker’s stand. This advice is OK, contingent on happy circumstances. If the lectern has been set at just the optimum height for the speaker, and the mike at the convenient height and distance from his mouth, he has no problems.

But it is better to fuss a little setting matters right at the beginning than to labor for a neck-wrenching half hour with one’s head bent awkwardly or with just the upper half of one’s physiognomy visible to the audience.

Professional entertainers make such adjustments with smooth assurance, while already addressing the audience, but they come on too glibly, and too eagerly, and with too much naked desire to ingratiate themselves.

Dignity isn’t much valued these days, but the speaker who lacks it won’t likely be accorded it. Respect begins in self-respect. The speaker’s attitude should be courteous, no obsequious.

Though what one aims for is somehow arousing in the audience the presentiment from the moment one mounts the stage that a cargo of combustible energy is being kept on hold--the movements of the body at the beginning are best deliberate.

There is no hurry. This is when the audience sits bated with expectancy. Exploit these few seconds of suspense.