The Eyes of the World are Upon You: Eisenhower's D-day Speech 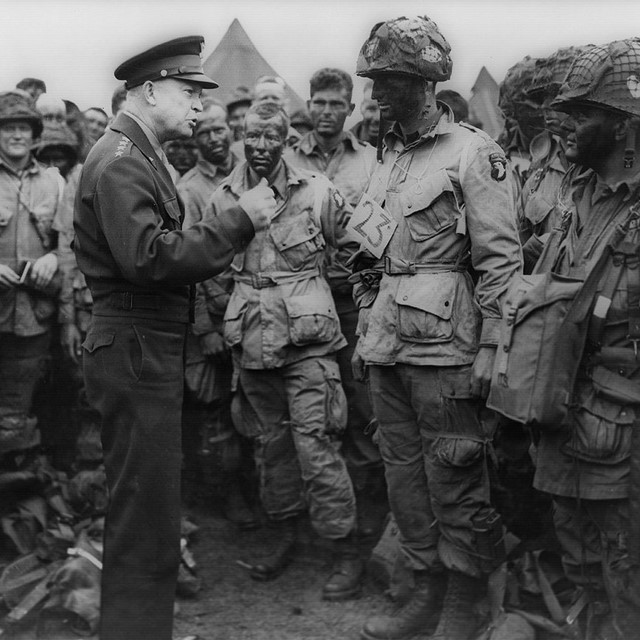 "The eyes of the world are upon you. The hopes and prayers of liberty-loving people everywhere march with you."

Prepared as a Order of the Day to troops, read for radio broadcast by the general, Dwight D. Eisenhower’s speech was recorded on June 5, 1944, 75 years ago on the eve of D-day.

The Los Angeles Times writes about Eisenhower’s process for editing the words:

In his private quarters inside a trailer on the Southwick grounds, Eisenhower wrote an Order of the Day to his troops. The first draft was typed. Eisenhower edited it in pencil.

Eisenhower had originally written two sentences toward the bottom: "The eyes of the world are upon you. The hopes and prayers of liberty-loving people everywhere go with you."

Eisenhower circled the sentences and moved them to the top of the message. He also changed the word "go" to the more muscular "march."

With this editing process—as we also observed of Franklin D. Roosevelt’s famous speech after the attack on Pearl Harbor—it’s worth noting that these men made time to craft the words they spoke despite extreme pressure and stress.

What Speakers Can Learn

Leaders during World War II have provided many examples of the power of well-chose words delivered when the stakes are high. A few lessons from Eisenhower’s D-day message that we can apply to our messages:

Here’s the full Los Angeles Times story on how Eisenhower prepared his statement—and how he wrote a second message he hoped he would not have to deliver.

This article tells the story of two recordings made just prior to D-day—the one for soldiers, another for people waiting for liberation—and William S. Paley’s scramble to re-record the second at the last minute.

This story in The Washington Post describes reaction to Eisenhower’s words.

Read the complete Order of the Day from the National Archives.

Below, Eisenhower’s recording of his D-day message to troops: