A Great Speaker Gets His Day 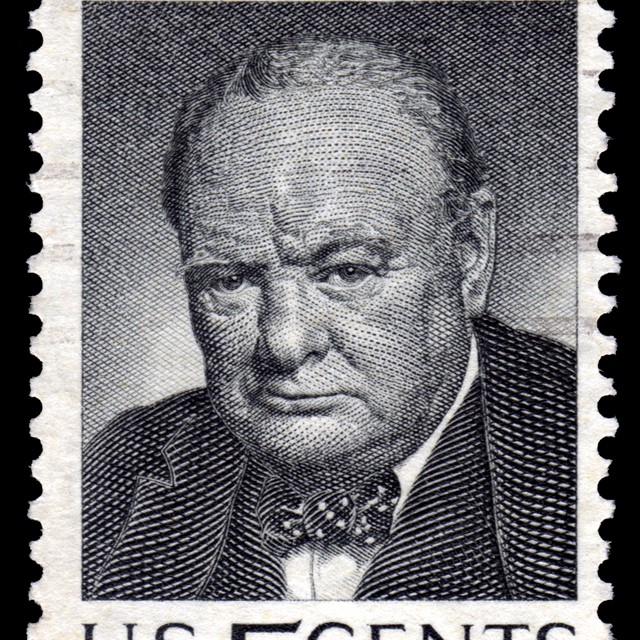 "It was a nation and race dwelling all round the globe that had the lion heart. I had the luck to be called upon to give the roar."

– Sir Winston Churchill, on his speeches made during World War II

Winston Churchill Day is April 9, but Buckley School Director Karen Kalutz doesn’t limit her celebration to one 24-hour stretch a year. In every program she teaches, she draws examples from Churchill’s speeches. The spark for her interest, she says, came from the work of historian William Manchester.

“I started reading biographies of Churchill after reading William Manchester's Goodbye Darkness. That was Manchester's only autobiographical book, but it blew me away. And led me to his biographies. I started with The Last Lion. I've read several other books about Churchill since, but the one I enjoyed most was Churchill: A Life by Martin Gilbert.”

Those books also led Karen to discover James Humes. Humes wrote speeches for Ronald Reagan and Dwight Eisenhower. Humes, who has reenacted Churchill speeches, has written a number of books about Churchill’s techniques and how other speakers can use them.

Among Humes’s observations are that Churchill kept speeches simple both in theme and in language, started strong and ended with an appeal to emotion, and made speeches visual by being specific--approaches Karen presses for when she works with speakers.

“One day at the school, I answered the phone to find James Humes on the other end,” Karen says. She admits to being a little star struck—in the way only a history and public speaking nerd can be. “I could hardly speak, but managed to get out that I was a fan of his writings on Churchill.”

As for Winston Churchill Day, it’s not an official holiday in Great Britain and its origins are American. April 9, 1963 was the date on which President John. F. Kennedy made Churchill an honorary citizen of the United States.

Here's Churchill's famed "We shall fight them on the beaches" address:

Churchill's grandson has written that his grandfather spent one hour of prep for every one minute of speech he delivered. Here's a dramatization from the film Into the Storm that attempts to capture some of that:

And here's a trailer just released, promoting a new movie about the man that will be in theaters this summer: