The Scoop on Public Speaking: About that Lectern 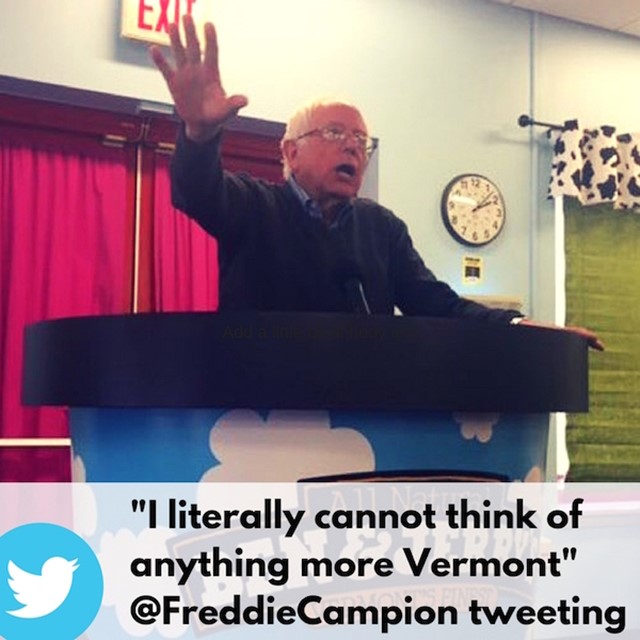 We've delivered from clear lecterns and giant wooden ones, lecterns that looked like missiles and others that resembled coffins.

But when we saw Bernie Sanders speaking from a lectern shaped like a carton of Ben & Jerry's, we realized we hadn't quite seen it all.

We have, however, heard some pretty crazy things about working from a lectern. Here are our top three:

Sorry, but no. Our beloved founder was keen to point out the difference, and he happens to have been right.

A podium is the platform on which you place your feet. Think podia-as in podiatrist. A lectern is the tall piece of furniture with the slanted top for your notes. Think lectern=lecture.

Some may ask: Is the Ben & Jerry's pint a lectern or a podium, because it appears Sen. Sanders is standing on/in it? (Isn't that a little like debating whether Chocolate Chip Cookie Dough is ice cream or cookies?) It's more speaker's stand than stage, so we're sticking with lectern.

One piece of hard-won advice, however: If you're requesting a lectern in a hotel conference center, don't bother asking for "a lectern." Don't even try requesting a "speaker's stand;" they'll think you mean something like old-fashioned stereo speakers. Order a podium and spare yourself the pain.

We hear this a lot from people who took public speaking in college. They're taught to stand back and never touch the thing, to imagine it will burn them. We think that's good advice for cast iron skillets. But for lecterns, not so much.

We recommend instead that you grasp the sides of the lectern, square yourself behind it, and take command of it. Your hands can rise up from it to gesture, then rest again on the sides. You do have to be careful not to tap or bang on the lectern, especially if there are live microphones attached to it.

Good speakers use lecterns all the time. And other speakers put themselves at a disadvantage by refusing to use one. When you're speaking, you should consider the pros and cons and make a deliberate choice.

A lectern is great if you're working from notes, are a nervous speaker, or need to bring some authority to a talk.

Speaking without a lectern might be better if you're in a casual setting, want to establish some closeness with your audience, or want to promote discussion and interaction.

It's not an all-or-nothing proposition, by the way. You can do both in a single speech, especially if you think it through. The most important thing is to consider the options and make choices based on your style and what the situation and message need.

As for speaking from inside an oversized pint of Chunky Monkey, we only hope one day we get the chance!