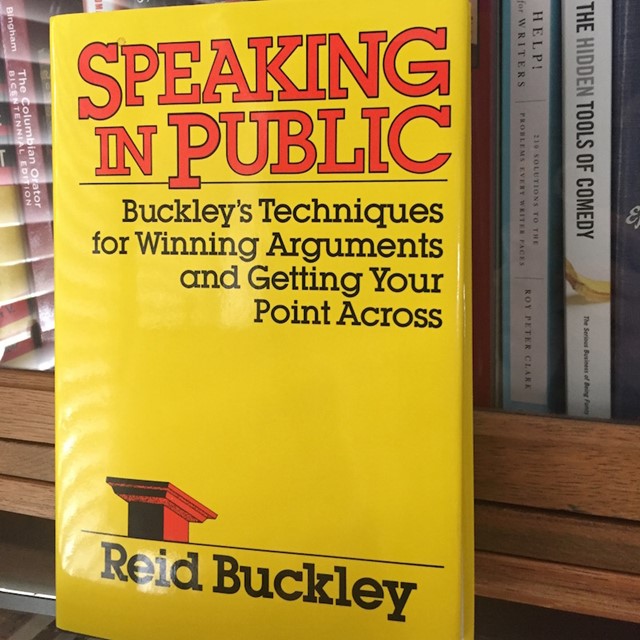 Thirty years ago, The Buckley School launched its flagship program and our founder Reid Buckley published his first book on public speaking. To mark the anniversary this year, we’ll be featuring public speaking tips and instructional excerpts from that book—"Speaking in Public: Buckley’s Techniques for Winning Arguments and Getting Your Point Across"—sometimes augmented with a few of our notes on his words.

“Gestures should issue out of the gut. Study drivers in Rome, Athens, Paris or Madrid during rush hours.”

– Reid Buckley on gestures, from Speaking in Public

From Chapter 10, A Grab Bag of Useful Tips:

There are five constituents to the effective use of one’s hands on which everybody agrees.

First, gestures must arise from the emotions. They must therefore be generated and come fully to flower simultaneously with the emphasis or rise in pitch of the voice. The entire body must be put behind a gesture, following through—as for example, on the clenched fist and raised arm—just as it must follow through with a punch.

When the voice rises, the tendency will be for the heels to lift slightly, and the torso to thrust forward; when voice drops in tone, for the body to slump, the heels to descend to the floor, and a step backward to be taken.

In your mind, sound out the word “eu-ryth-mics.” That’s the complete gesture, from initiation to end.

Gestures will vary depending on personality type. The restrained temperament may employ few gestures. It is incongruous for a person of this type to thrash around from the lectern like a deranged Rodney Dangerfield or excited John Madden.

On the other hand, in a disciplined speaker, as in a disciplined actor, the extravagant gesture at a suitably climactic moment can have extraordinary effect. Recall Sir Lawrence Olivier in his film version of Hamlet, when he thrust one hand up at the heavens and fairly shrieked, “The play’s the thing/Wherein I’ll catch the conscience of the king”—spinning like a dervish on the stage. It startled. It shocked. But it worked.

This is a daring prescription. One may have to boast the histrionic talents of an Olivier so to do violence to the temperament to which one belongs. On the whole, people best execute gestures natural to them, developing a repertoire from which to draw.

One doesn’t shout at a friend across the street, “Hi Fred!” and only then wave one’s hand at him. It looks as foolish and awkward on the platform for the complementing gesture to lag behind or by too great an interval anticipate the sense of what one is saying.

Incongruity results if the gesture is not consonant with the emotional pitch of what one is saying. That is, one does not pound the lectern when suggesting that maybe a compromise is the indicated course of action, nor shrug one’s shoulders when one is petitioning Congress for a declaration of war.

Speakers who windmill nonstop from the lectern tire audiences. Let the hands be still when there is no need to emphasize a point; let them fall as naturally as possible to the sides or place them on the lectern for a while.

Do not succumb to the habit of leaning into the lectern, flicking the spread fingers out to the side like a bird stretching its wings. This can drive an audience nuts.

A gesture may fit one occasion but not another. Older people prefer parsimony in gestures: they don’t like to be lectured to, and too much hand flinging about in their faces irritates them. Children, on the other hand, respond to enthusiasm, the more exaggerated the better.

Fullblown gestures are out of proportion in a small room and before a small audience; the subtle gesture, on the other hand, won’t do in an auditorium. It passes unobserved as though lapped up by the space.

The energy of one’s gestures, moreover, should be determined by the power of the voice. A weak voice accompanying strong gesture is like a high voice piping out of a big man.

Let me sum it up. Gestures should be generated naturally out of the strength of emotion or intellectual heat. Do not force them.

Study drivers in Rome, Athens, Paris or Madrid during rush hours. Their gestures are: appropriate to the provocation, expressive, energetically compatible with the tone of voice, complemented by the most eloquent body language, and obscene.

Should you the be target of such an explosion, listen with bright ingratiating eyes, smile, and then when the other driver has finally exhausted his insults, say to him “And your mother.” And run.