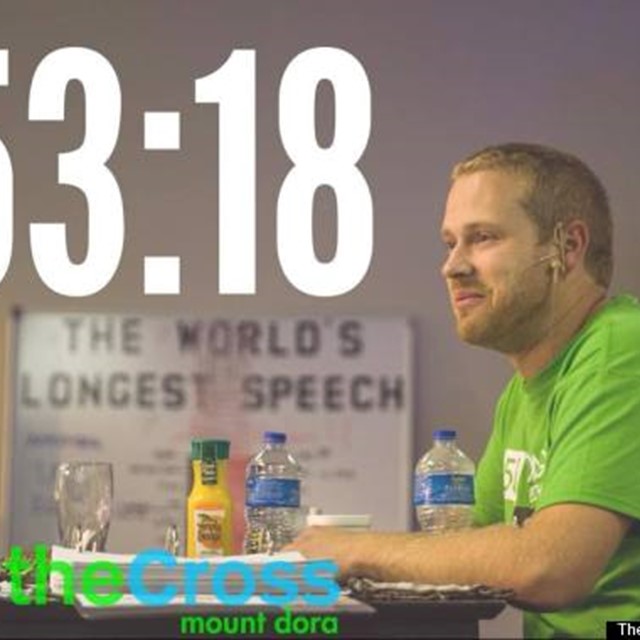 Working hard for the audience means making the effort to prepare, so that you can get your point across without wasting their time.

Unless you’re going for a world record.

One of our favorite stories of all time is about Florida pastor Zach Zendher, who spoke for 53 hours and 19 minutes. He opened his talk at 7a.m. on November 7, 2014, and concluding it at precisely 7:32a.m. on November 9. That effort won him the dubious honor of Guinness Record for world’s longest speech.

What can you take away from this? Well one thing, for sure: No matter how painful it may have felt at the time, none of us has actually endured “the world’s longest speech.”

We also identified one idea that might be worth stealing. “We had water guns in case anybody fell asleep–that I could squirt them, or they could squirt me,” Zendher told NPR.

Buckley School Director Karen Kalutz is fond of talking about a certain minister she knows who goes to the pulpit on Sundays with no notes. This fellow “knows the Bible backwards and forwards.  And that’s the problem,” she cautions people attending our programs, as she makes the case for preparing remarks and speaking concisely.  As Kalutz says, “You rarely hear people complaining that a speech ran short.”

The ultimate long-winded pastor, Zendher also planned to preach the Bible front to back but he did have notes–200 pages of them along with 600 PowerPoint slides. According to reports, even when Zendher had set the new record, he kept on talking for another five hours.

Find the full NPR story here–and listen to a little of his sermon.

And here’s more insight into how he prepared.