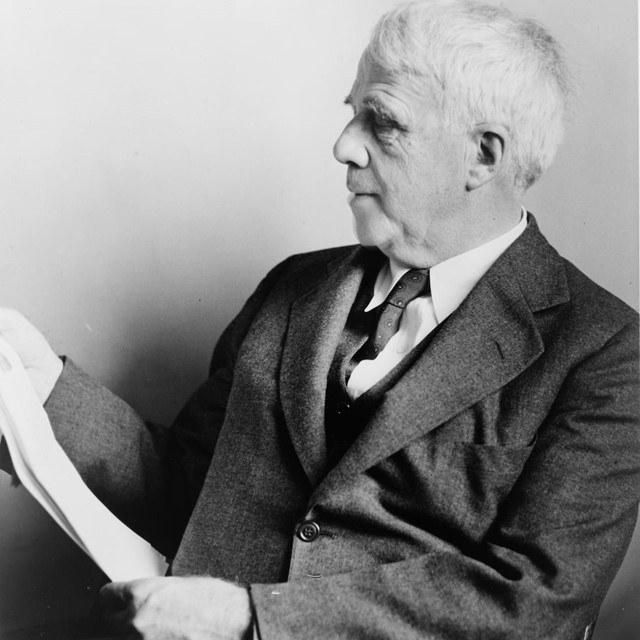 "No other living poet has written so well about the actions of ordinary men."

Popular with even casual readers of poetry to this day, Robert Frost is often described as belonging to two eras: that of the traditional poet writing about nature and also very much a 20th century writer.

Born in San Francisco in 1874, Frost moved to Massachusetts when he was 11. He sold his first poem nine years later. He would go on to write plays, become the poet laureate of Vermont, and receive the Pulitzer Prize four times—the most of any poet. He was nominated for the Pulitzer Prize for literature 31 times.

One of his most famous poems is "The Road Not Taken," a work that poet Katherine Robinson says we were not meant to take so seriously. She provides this background in her Poetry Foundation guide to the poem:

Robert Frost wrote “The Road Not Taken” as a joke for a friend, the poet Edward Thomas. When they went walking together, Thomas was chronically indecisive about which road they ought to take and—in retrospect—often lamented that they should, in fact, have taken the other one. Soon after writing the poem in 1915, Frost griped to Thomas that he had read the poem to an audience of college students and that it had been “taken pretty seriously … despite doing my best to make it obvious by my manner that I was fooling. … Mea culpa.”

While you might also enjoy reading Frost's "After Apple-Picking" and "Nothing Gold Can Stay" as part of your autumn celebration, we provide "The Road Not Taken" here for your read aloud practice this month:

The Road Not Taken

And sorry I could not travel both

And be one traveler, long I stood

And looked down one as far as I could

To where it bent in the undergrowth;

Then took the other, as just as fair,

And having perhaps the better claim,

Because it was grassy and wanted wear;

Though as for that the passing there

Had worn them really about the same,

And both that morning equally lay

In leaves no step had trodden black.

Oh, I kept the first for another day!

Yet knowing how way leads on to way,

I doubted if I should ever come back.

I shall be telling this with a sigh

Two roads diverged in a wood, and I—

I took the one less traveled by,

And that has made all the difference.