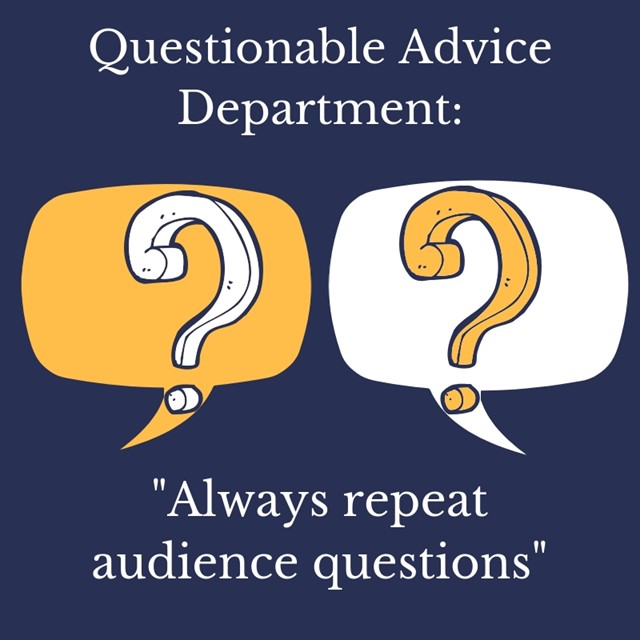 "Always repeat the question and then answer it."

– Tip #18 from "Public Speaking Advice of the Best TED Talks"

It’s common advice when teaching speakers how to better manage audience questions and challenges: Repeat the question before answering it.

Those things are true.

But there are plenty of reasons you might want to re-think repeating a question verbatim in every situation. We coach speakers to:

Repeat the positive but reframe the negative.

If someone says, “How did you do such a great job on such short notice?” then by all means, repeat that positive question before answering it.

But if someone says, “Why did this cost so much?” consider how you could reframe. You might say: “We’ve had a question about the budget.” That allows you to address the costs without having to start from a defensive position.

Get to a more useful answer by rephrasing a poorly asked question.

So instead of repeating an awkward or confusing question, try clarifying it a little. For example, you could say: “I think you’re asking about _____,” then launch into your answer.

Simplify a multi-part question, choosing and repeating the part you're best able to address.

Sometimes, an audience member will ask a long or multi-part question. Zero in on the part of the question you feel is most useful to answer. Break it down.

Use a question (or non-question) to springboard to a topic you’d like to talk about.

In many audiences, there are people who want to ask a question, not so they can hear your answer, but so that they can make a point themselves.

So they’ll either ask a leading question. Or they’ll make a statement—with no question included at all.

If you can recognize what’s going on, this can be an opportunity for you to shift the direction so that you can talk about something more useful to your audience.

A couple of years ago, Buckley faculty Jenny Maxwell was taking questions after speaking to a small group of people. One older gentleman stood up and asked her “Have you ever given a TED Talk?”

The simple answer was no, she had not. But the gentleman asking the question wasn’t interested in her answer. He had the floor, and he proceeded to talk for 10 minutes about how he'd spoken at a local TEDx event and how wonderful his talk had been.

When he finally finished, several people in the room asked, “What’s a TED Talk?”

“As soon as this started to unfold, I could see what I should have done,” Jenny says. “I just didn’t pick up on what was happening quickly enough."

"If I could rewind, when he asked, ‘Have you ever given a TED talk?’ I'd have said, ‘We’ve had a question about TED Talks. Is everyone familiar with those?’  Then I could’ve explained what they are and kept control of things," says Jenny. "So that one goes into the lessons learned file for me.”

Don’t be ridiculous in your adherence to this tip.

One thing we’ve learned about public speaking tips is that when people hear them, they tend to suspend common sense and apply the tip no matter the situation. Don’t do that.

It’s important to recognize that all Q&A situations are not the same.