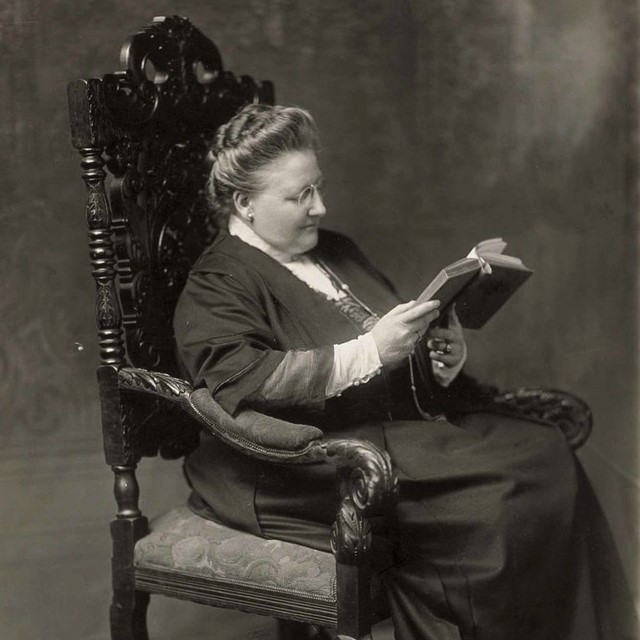 The Buckley School's founder believed that all speakers should hone their presentation skills by reading poetry out loud. We keep that worthwhile practice alive by including a poem in our magazine each month for you to read aloud. The picture above is not of our founder; it's Amy Lowell from the cover of Time magazine.

“Given one more gram of emotion, Amy Lowell would have burst into flame and been consumed to cinders."

– Journalist Heywood Broun in his obituary of Amy Lowell

She smoked cigars, wore a pince-nez, and was accused of hijacking the Imagist movement. Amy Lowell said of herself, “God made me a businesswoman, and I made myself a poet.” She published more than 650 poems and was awarded the Pulitzer Prize for Poetry posthumously, in 1926.

As an imagist poet, she placed emphasis on color in her verse. “She once feuded via Poetry magazine with citizens of South Carolina,” writes David Beardsley in Harvard Magazine, over a matter of hue:

“Her poem ‘Magnolia Gardens’ describes her disappointment at finding the blooms at a famous Charleston garden a ‘Hateful,/Reeking with sensuality,/Bestial, obscene’ shade of magenta. After residents wrote letters challenging her perception, Lowell found another poem describing the flowers as magenta, convinced its author to submit it to Poetry with a letter defending ‘Magnolia Gardens,’ and persuaded the magazine's amused and incredulous editor to print the other poet's work.”

Here's her poem “Summer Rain” for your June read-aloud:

All night our room was outer-walled with rain.
Drops fell and flattened on the tin roof,
And rang like little disks of metal.
Ping!—Ping!—and there was not a pin-point of silence between
them.
The rain rattled and clashed,
And the slats of the shutters danced and glittered.
But to me the darkness was red-gold and crocus-colored
With your brightness,
And the words you whispered to me
Sprang up and flamed—orange torches against the rain.
Torches against the wall of cool, silver rain!