To Be Repeated: The Stump Speech 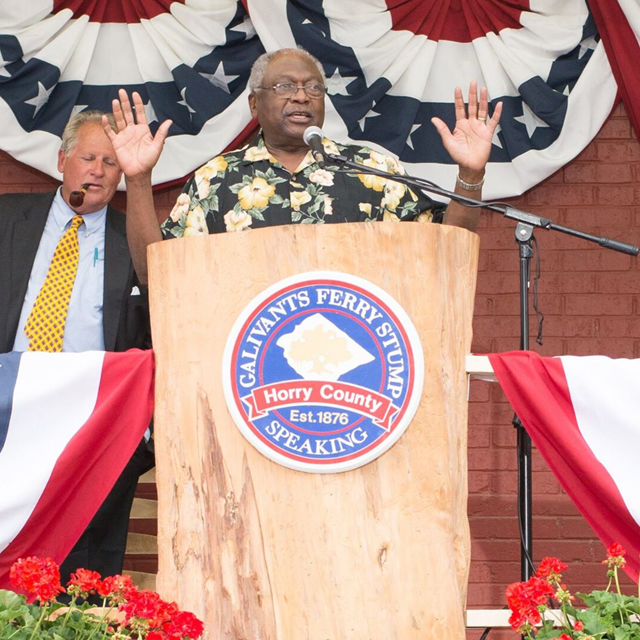 Above, Congressman James Clyburn speaking at Galivants Ferry. The stump lectern is a nod to the old tradition of using a real tree stump as a podium on which to stand and give a political speech.

"Some very good stump speeches are delivered from a table, a chair, a whiskey barrel, and the like. Sometimes we make the best stump speeches on horseback."

– From a memoir of the American frontier

You may know, as we certainly do—having a single speech you can give time after time is a standard item in the political candidate’s toolbox.

It's called a stump speech, and it's a concept that many in the business world could benefit from using.

You create a speech or presentation that contains your primary messages, the ones you're called on to deliver frequently. And like the best stump speeches, you design it so there's room for the message to evolve—whether that's to update with new information, personalize the stories you tell, or drop in responses to challenges.

The term "stump speech" has close ties to the state where our school is located.

Galivants Ferry, South Carolina, is home to the country’s oldest and largest stump meeting—an event that's been going on for 143 years.

As organizers told The New York Times, no one is absolutely certain a stump was used at the first event back in the 1800s, though there is a grove of trees with stumps that certainly could’ve been used to give speakers a podium courtesy of Mother Nature and loggers.

As Grammarist points out:

The idiom on the stump comes from the habit of early American politicians traveling the countryside to make campaign speeches. In rural areas there was often no stage or place for a speaker to rise high enough to be seen and heard by a crowd, so the politician would stand on a tree stump. In time, traveling around the countryside in order to campaign for office came to be referred to as being on the stump.

Abraham Lincoln, it may come as no surprise, was known for his skills as a stump speaker.

Democratic presidential candidates are speaking today (September 16, 2019) at a special edition of the Galivants Ferry Stump, and they'll have a lectern that looks like a tree stump made especially for the event.

Thousands are expected to come to Galivants Ferry's country store to hear these speakers in person, even though candidates can be seen readily on video any time.

According to organizers, the old-fashioned combination of speakers and a live audience still has huge appeal (and we agree!). "It’s your true retail politicking," event coordinator Sally Howard told the Post and Courier. "They have the opportunity to work the crowd and do that old one-on-one campaigning."

"A good stump speaker could always attract a crowd, and a wit combat between two speakers representing opposite parties was a real holiday of sport."

– From a history of the Lincoln-Douglas debates

Anatomy of a stump speech

For a look at how a stump speech works and evolves, you might like this analysis of an Obama stump speech provided by The Washington Post. You’ll see:

Below, a news story that gives you a look at a Galivants Ferry stump meeting from 2016: