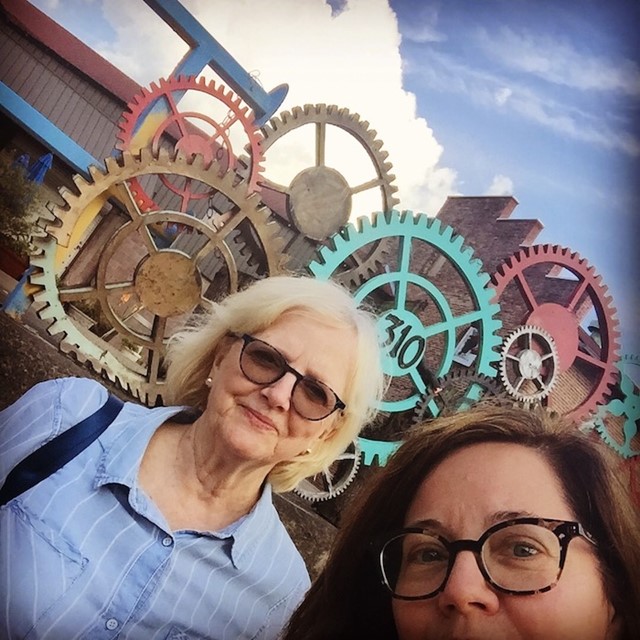 Pottery pulled from a flaming trashcan was not what we were expecting. We got lucky with that.

Karen Kalutz and I had arrived late afternoon in Asheville, North Carolina. We were leading an on-site presentation skills class for 20 people the next day. So before we grabbed dinner and reviewed the agenda, we decided to make the most of the hours—and ventured over to the River Arts District adjacent to downtown Asheville.

Spread around a sizable area near the French Broad River, the district has turned a former warehouse/industrial district into a zone filled with galleries, shops, studios, plus restaurants and a new wine bar.

First Stop: A Swerve into Curve

Not sure quite how to tackle it, we swerved into the parking lot of a building with the word “Curve” emblazoned on the side. This, we learned, is the Curve gallery and garden. We saw jewelry cast from seeds, pods, and leaves and met one of the jewelrymakers.

Then, we discovered Silver River Chairs, an amazing museum of chairs plus a workshop where you can learn to cane or weave a chair seat using traditional materials and nearly-lost techniques. (I’ll be taking a family heirloom in my SUV and driving back to attend one of their chair caning boot camps.)

Next Stop: Pottery on Fire

Back into the car after that, we drove over to a huge brick building. It's home to The Village Potters, a large pottery gallery associated with a number of studios and classrooms. As Karen admired the raku pottery, one of the artists told us we should follow her out back to see some new pots being pulled out of the firing process.

For raku, I learned, the pottery students first brush slip and spritz glaze onto the pot, then fire it in a kiln. Straight from the kiln, the super-hot pottery is put into trashcans filled with shredded newspaper. The paper bursts into flames, creating patterns on the pottery and causing the glaze to fall off.

It’s very exciting, because you don’t know what will come of out the process until you see it—plus flames in a trashcan!

I loved watching the process but came home with a more traditionally-fired piece, created by one of the gallery’s apprentice potters.

Make a Day of It

There are 22 buildings included in the River Arts District, so you could spend a lot of time here—and it would be time well spent.

The artists and craftspeople we met were eager to show you how their work is created. Their work is beautiful. The whole area is fascinating. And it’s a lot of fun.

You can find lots of information online, as well as a map.

Or just stop at the first gallery and ask for a printed map and make it up as you go along. That’s what Karen and I did. And we got to see raku pottery pulled out of the flames. Not bad for an unplanned adventure.

And a note for those attending our Executive Seminar in Camden: A visit to wonderful Asheville might make a nice side trip for your weekend. It's just a 2.5 hour drive away.