Welcome to Camden , The Buckley Experience 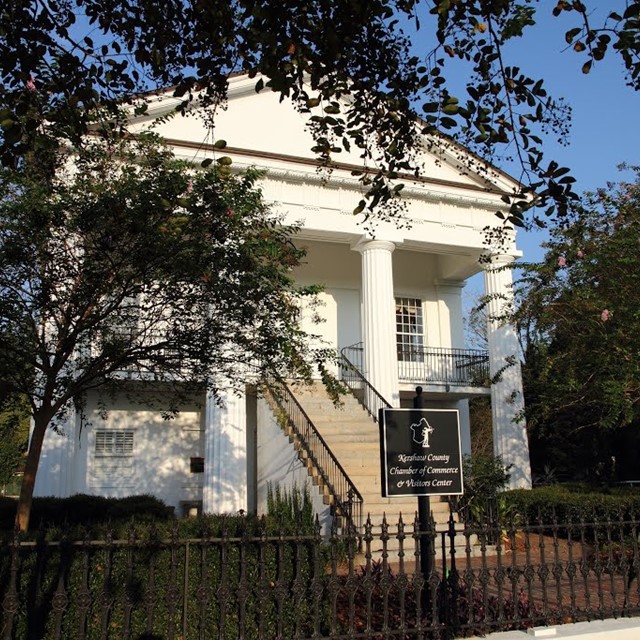 “It should blend stupendousness with elegance, and be of such magnitude and beauty as to be an object of pride to the American people, and of admiration to all who see it.”

– The Washington National Monument Society, setting out their expectations in 1832

The Washington Monument is one of the most recognizable structures in the world. At 555 feet, it's also the world's tallest obelisk.

It was created by the same architect who designed Camden’s courthouse on Broad Street.

Robert Mills, a South Carolinian, was the first American-trained architect. He was born in Charleston in 1781. While still a teenager, Mills studied under White House architect James Hoban, then met Thomas Jefferson, who offered him access to his library at Monticello.

By 1808, Mills was ready to work on his own and over the course of his successful career, designed many civic buildings and public works. In addition to his claim to fame as original designer of the Washington Monument, Mills is noted for his work as architect of the U.S. Treasury building and a pioneer in the development of fire-proof buildings.

You can see some of those fire-proofing features in Camden’s Robert Mills courthouse. The walls are 22-inch thick masonry at the base and taper to about 15 inches thick on the second floor. Designed in 1822, the building was restored to its 1845 renovations status, when wide pine plank floors were installed to cover the second story brick ones. Original woodwork, the judge’s bench and the witness box all remain as Mills designed them.

The Buckley School has hosted lectures and debates at the Robert Mills Courthouse. "Our Disciplined Thinking programs filled the courthouse with audiences on many occasions," says Pam Schreiner, who organized those events. They came to hear speakers including William F. Buckley, Jr., former U.S. Attorney General Ed Meese, and historian Alistair Horne.

And while the Washington Monument may be closed to visitors until spring of 2019, you can tour the Mills courthouse for free, any day of the week. The building is used for special events and is the year-round home of the chamber of commerce and visitor's center. For hours and other information, visit the Kershaw County Chamber of Commerce website.