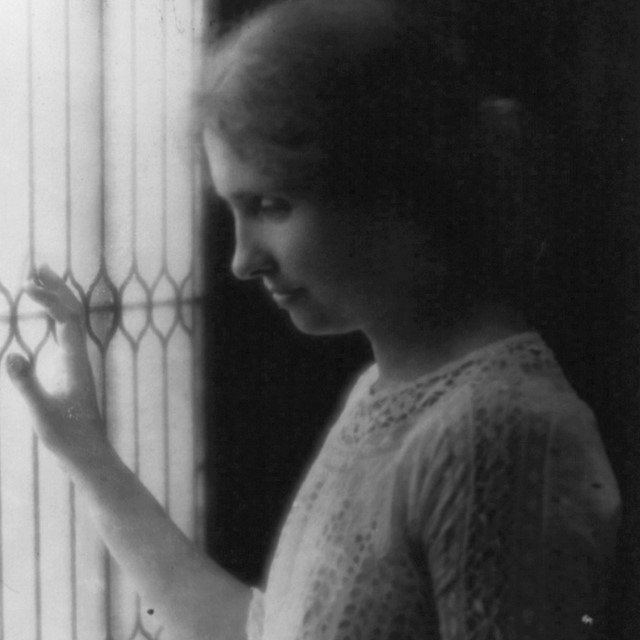 "I will not disparage the editors. They are an overworked, misunderstood class. Let them remember, though, that if I cannot see the fire at the end of their cigarettes, neither can they thread a needle in the dark."

– Helen Keller in her "Strike Against War" speech, taking on the charge that she might be limited in her opinions by her disabilities

On January 5, 1916, Helen Keller delivered a speech in New York City. The speech itself - "Strike Against War" - includes some brilliant passages, including the lines you see above.

But even more impressive for most of us is that Keller made speeches at all.

Keller was left deaf and blind at age 2 by illness. She was 6 when teacher Anne Sullivan helped her discover how to communicate and 10 when she began to use her voice to speak. The events of Keller's early life are known to many of us because of the film The Miracle Worker.

Less well-known is that Keller had a 50 year speaking career, often advocating for the poor and disabled, using her own voice to convey her message. In an article for Time in 2015, Sasha Cohen writes:

Because of the film’s focus, many people know more about Keller’s early years than they do about the remainder of her life. But to frame her life as an up-by-the-bootstraps tale, in which sheer optimism and perseverance solve the personal challenge of disability, is to miss a large portion of what Keller fought for.

In her writings and speeches, Keller called for revolution rather than reform. She had no patience for compromise, and argued that charitable aid did more to assuage the guilt of the prosperous than to improve the conditions of vulnerable people’s lives. Instead, Keller called for the dismantling of an economic order in which “the working class lives in want while the master class lives in luxury.”

Keller delivered "Strike Against War" at Carnegie Hall during an event organized by the Women's Peace Party and the Labour Forum. Denise Graveline in her blog The Eloquent Woman had this to say about the speech's text:

For someone with apparently every communication strike against her, Keller minces no words, and delivers a speech that would make a brave person think twice. She does not hesitate to refute the current tide of opinion.

You can find the full speech here.

You can read Graveline's analysis of the speech here.

Below, you'll find newsreel footage of Keller's tour of Australia that shows Keller speaking to a group of children. Not only can you see practically how she went about the task, but we expect you'll also be impressed with her delivery. She uses body language, vocal inflection, and gestures to bring genuine passion to her talk--even though she has never seen or heard other speakers deliver. Remarkable!