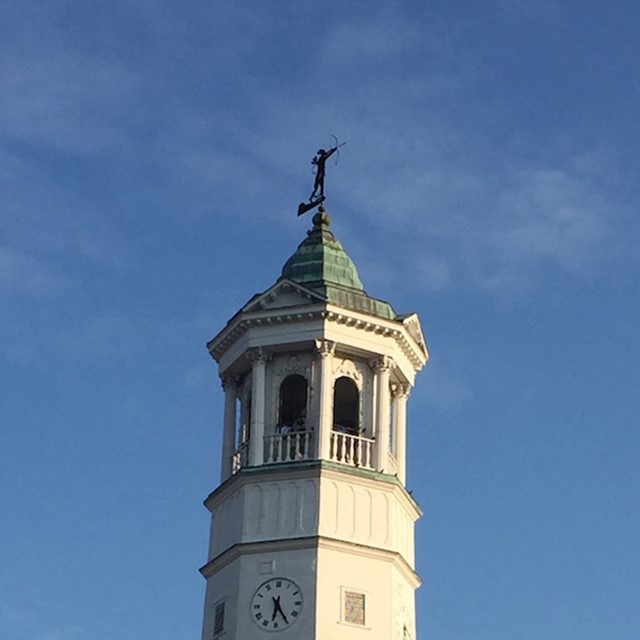 Who is this King Haigler?

He was chief of the Catawba Indian Nation. To many, he's the patron saint of Camden. The image of him depicted by that weathervane is replicated on signs and even van decals, all around town.

Here are five things to know about this Native American leader and how he came to represent a town best known for horses and Revolutionary War history.

1. He has been known by many names.

“King” is not a word that originated with the Catawba people. Neither is Catawba, for that matter. According to the Catawba Indian Nation, the tribal people called themselves yeh is-WAH h’reh, which means people of the river. Colonists called all the tribes in the Catawba River Valley Catawba.

As for King Haigler, he is also known as Nopkehe, Arataswa, and Oroloswa. Even the spelling of Haigler varies and shows up as Hagler, Haggler, Haglar, Hegler, and Heiglar.

According to the South Carolina Hall of Fame, he was born Arataswa Hagler and given the title of king when he was recognized by the royal governors as leader of the Catawba Nation.

2. King Haigler came to Camden because of small pox.

When 25 Catawba warriors joined an expedition led by colonists in 1758, they returned with small pox. The disease is believed to have killed two-thirds of the tribe in the winter of 1759, with only around 1,000 surviving.

To escape small pox, Haigler relocated to Camden or as it was called at that time—Pine Tree Hill.

3. King Haigler was known as a peacekeeper.

Though the Catawba were fierce warriors and counted 11 other tribes as enemies, King Haigler earned a reputation for minimizing conflict on all fronts. As chief from 1750 to his death in 1763, he was seen as an important ally by the colonists and used that position to negotiate protections for the Catawba.

4. The famous image of King Haigler was created by a man who never saw him.

Around 1826—decades after Haigler’s death--J.B. Mathieu completed the five-foot one-inch tall iron representation of Haigler, part of a weathervane that has stood at several locations in Camden, including a position atop the opera house tower.

Though the opera house did not endure, King Haigler the weathervane carries on. Often called “a life-sized” effigy of Haigler, two full-sized replicas can be found today in Camden. One is at 900 Broad Street on the old Opera House Tower. The other is on the dome of City Hall at 1000 Lyttleton Street. Mathieu’s original weathervane is preserved at the Camden Archives and Museum.

“Why is he called the Patron Saint of Camden? It was the time of the French and Indians War and the Catawba had sided with the British. He protected the township. We didn’t have the word ‘king’ -- the Europeans brought that word.”

5. Haigler hoped to make a permanent place for his people in South Carolina.

King Haigler could see that the colonists were moving in. At the time of his death, he was working to secure lands for the Catawba.

In 1763, the Catawbas were given a title by the King of England to 144,000 acres. In 1840, with the Treaty of Nation Ford the Catawba sold all but one square mile of their land to South Carolina. That treaty was not valid, though, and in 1993 it was finally reversed with a $50 million settlement to support economic development.

The Catawba Nation is the only federally recognized tribe in South Carolina. In the last U.S. census, fewer than 3,500 people claimed Catawba ancestry. In 2009, King Haigler became the first Native American to be inducted into the South Carolina Hall of Fame. In 2012, a statue of Haigler with Camden's founding father Joseph Kershaw was placed on the Town Green

Here's a video of present day leaders from the Catawba Indian Nation talking about King Haigler:

For more details about King Haigler, we found this article written by Louise Pettis in 1999.