On this Day: The Man in the Arena 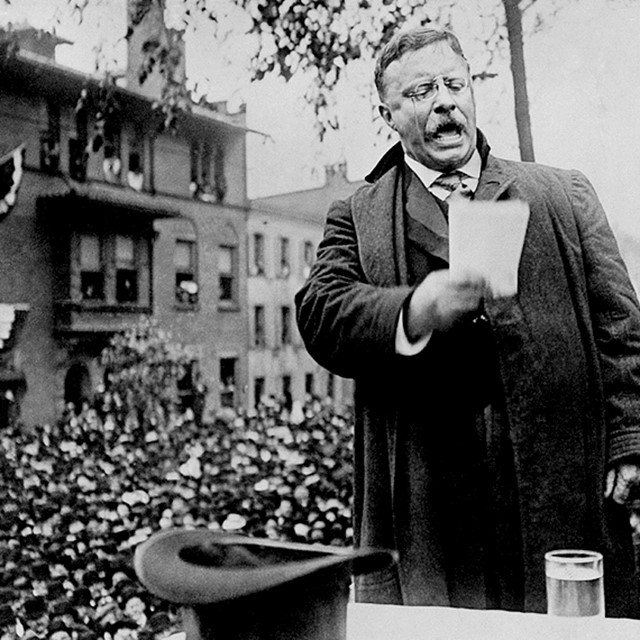 Theodore Roosevelt stood before a crowd at the Sorbonne in Paris on April 23, 1910, and gave a speech that covered a host of topics from his family history to the falling birthrate in France.

But it's his imagery of the man in the arena--face gritty with dust, dripping sweat and blood--that has made this speech one of the most quoted in the English language.

Roosevelt had titled the speech "Citizenship in a Republic." But today, it is best known for one striking passage that urges us to ignore the skeptics and embrace the challenge to do more:

It is not the critic who counts; not the man who points out how the strong man stumbles, or where the doer of deeds could have done them better.

The credit belongs to the man who is actually in the arena, whose face is marred by dust and sweat and blood; who strives valiantly; who errs, who comes short again and again, because there is no effort without error and shortcoming; but who does actually strive to do the deeds; who knows great enthusiasms, the great devotions; who spends himself in a worthy cause; who at the best knows in the end the triumph of high achievement, and who at the worst, if he fails, at least fails while daring greatly, so that his place shall never be with those cold and timid souls who neither know victory nor defeat.

Roosevelt had left the White House in 1909 and had spent the following year in Africa and Europe—attending events and giving speeches along the way.

Still, he was surprised to learn that his speech in Paris on that afternoon was such a hit. He confessed to Henry Cabot Lodge that the reaction of the French had been a little hard for him to understand.

Lines with a life of their own

In the years since, those lines have turned up in a variety of significant places:

The man who inspired the teddy bear might also be amused to see how his words have been etched into pop culture: as tattoos on the arms of Miley Cyrus and Liam Hemsworth and as ad copy to sell Cadillacs.

You can find the text of Theodore Roosevelt’s entire speech here.

This link takes you to video of Nixon’s resignation speech; he delivers Roosevelt’s words at the 11:20 mark.

Below, the mystifying television commercial that uses his words to sell cars: