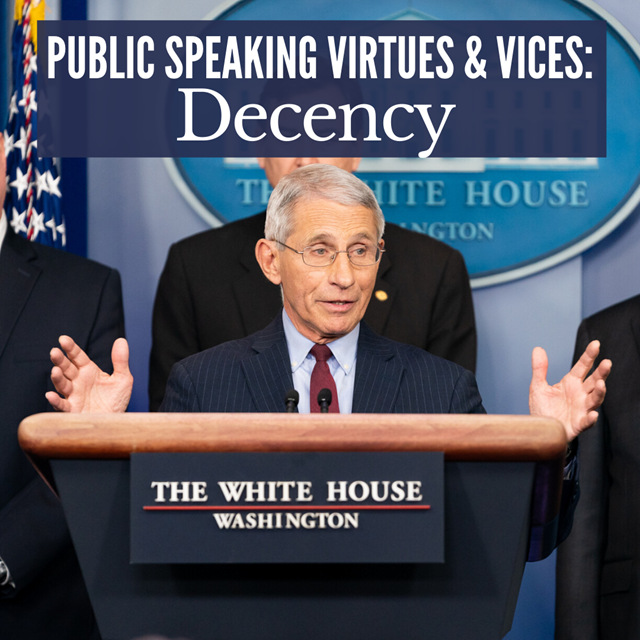 "Character is the primary element that a speaker brings to the stage. Everything else can be learned," writes Reid Buckley. In his book "Strictly Speaking," he looks at the virtues and vices a speaker can project. We’re providing excerpts in our online magazine.

"I thought whoa, that’s a good idea. He’s honest, straightforward...I think everyone can connect with the guy, which is why the cookies are popular."

It's so unfair! Some folk--some physical types, even--suggest, with no conscious effort on their part, an essential decency that is mightily attractive to audiences.

Decency is, I think, the social personality that most naturally and most often translates on stage. It can be faked, of course, though not easily. It seems to be a God-given grace that in some people transpires whenever attention is focused on them, either at a cocktail party or in an interview or when they mount the lecture platform.

Should you happen to be one of the fortunate few, lucky dog. You are the envy of speakers.

Should you happen to be one of those rare decency-projecting persons and also clever, luckier dog yet. You are a rare platform presence, because most clever people, to their rue, project--unless they are careful--foxy disingenuousness, untrustworthiness, and sometimes malice.

The speaker projecting decency isn't cut out for polemics, for becoming a partisan in a sharp controversy. It's contrary to character, subversive to his major asset.

If he is trapped in a polemic, he should seek always reconciliation between opposing views; he should express goodwill unfailingly and unfailingly attribute goodwill to opponents. The audience will lap it up. They will desire to be on this speaker's side.

By virtue of being decent or conveying decency, half the battle is won. But decent persons on stage cannot rely wholly and alone on the grace with which they have been blessed.

The quiet, pale, scholarly type may in the beginning verbalize hesitantly and flash timid glances, but as she enters her talk, she must discard the protective shell and overcome her shyness. Her articulation must improve, her voice must gain in volume and confidence, and she must inject energy into her whole presence.

The stoutly cheerful decent person must permit himself to become serious, take a firm stand--take pains that he is not mistaken for an amiable fool.

Decent souls will win many an argument that the cleverest partisans lose. The reason: The audience identify with them, thinking of themselves as, at heart, decent also.