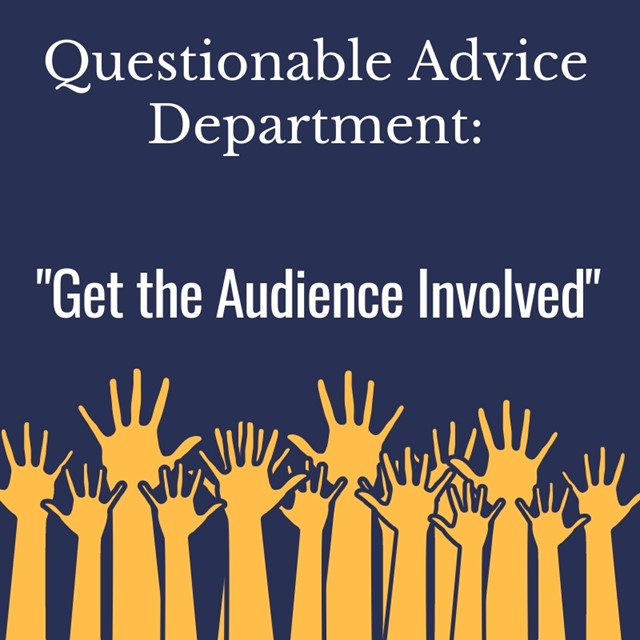 "Lordy, does that sound unpleasant."

– From a New York Times article about audiences allergic to interaction

Have you ever been at one of those presentations when the speaker says, "I want everyone to close their eyes."

Do you do it? Or do you look around to see who else closed their eyes?

How about "Everyone stand up," and the audience is still awkwardly standing because the speaker forgot to tell them to sit down.

We see a lot of presentations and we’ve been asked to stand, close our eyes, hold our breath, introduce ourselves to strangers, and any number of other things.

Sometimes it is engaging. But often, we find ourselves wondering: Why would I want to do that?

Some Audience Interaction Can Be Good

"This was a great way for the audience to be involved, because it gave you an outlet for your reaction that wasn’t disruptive and didn’t get out of control," Jenny says. "I really loved participating this way, and I’ve used it in classes I’ve taught since—as a way to get students to physically respond to quiz questions and statements."

Asking the audience to raise their hands can be a similarly simple way to get people involved, as long as you ask the right types of questions. "Gosh, you can’t ask people to incriminate themselves and we’ve actually had speakers who sincerely pose questions," Jenny says, “like 'Who here has ever been fired?' and 'How many of you smoke?' As you might guess, those created some awkwardness."

We’ve attended presentations that use polling apps or Twitter to engage the audience. Sometimes, that works, too.

"The most amazing example I’ve seen of this was the play Privacy, which I saw at the Public Theater in New York summer before last," Jenny says. "Rather than discourage you from using your smartphone, the play is built around the audience using their phones throughout. It was quite the production—but it worked, because the phone use was integral to the play-yet not required to enjoy it."

Everyday presentations may not lend themselves to this kind of production. And there’s always the worry that bringing in Twitter will create another distraction.

So how do you make decisions about audience interaction and when to use it?

Before you dive into audience interaction, we suggest you:

Just as gratuitous animation does not make a bad PowerPoint presentation better, gratuitous audience interaction is probably not your best bet. “I know we all worry the audience will get restless or bored,” Jenny says, “but I hope to help people solve that without resorting to goofy tricks.”

Want the audience to stand up and do something? Be clear in your own mind, then, on how it helps you illustrate a point or engage them with the message.

If you’re going to have the audience do something, think it through. How will you time and manage it? How will you regain control? What will you do if you have technical problems? And, by the way, how can you avoid those if at all possible?

If an audience interaction involves significant setup (such as distributing hundreds of cookies or using an unfamiliar app on a smartphone), be sure the payoff is worth the effort. Otherwise, you may alienate the audience by taking up their time and underwhelming them.

3. Put yourself in the audience’s seats.

That last thought brings us to the most important consideration: Who is in the room and what will their experience be? How do you think they like to receive information?

What can work for a large audience may not play as well in a more intimate setting. Consider whether some of your audience may feel vulnerable (as in, there are senior executives in the room with more junior staff).

Not all audiences will embrace the same types of interaction, so don’t assume that what works for one group will work for all of them. And try to envision what the experience will be like for them, step by step.

Some low key, low tech interaction that tends to work most of the time:

Here’s an amusing look at immersive experiences from a writer who describes herself as allergic to audience interaction—plus some over-the-top theater concepts that might inspire you.