Speaking to Lead: Recall what moves you 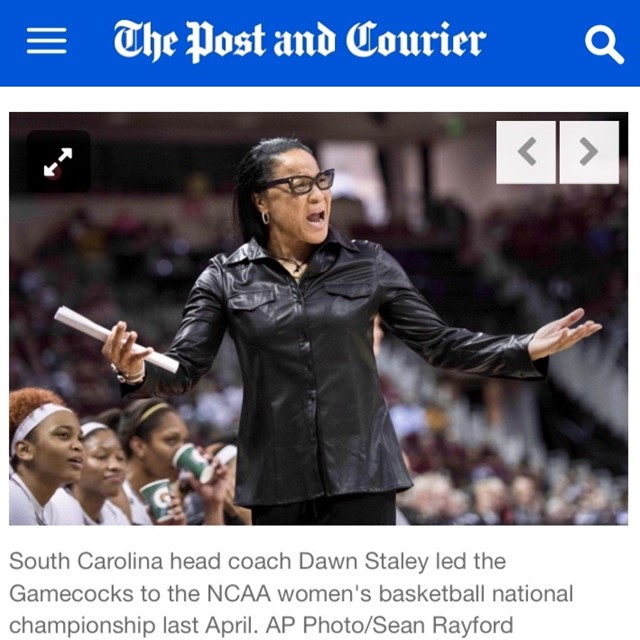 "You can see, she’s like the Pied Piper of everyone."

Public speaking doesn’t come easy. If you’ve ever had that thought, you’re not alone.

Basketball coach Dawn Staley has excelled on sports’ biggest stages—as a player and as a coach. She led the University of South Carolina women’s team to a national championship. She’s the new coach of the U.S. Olympic team.

The Post and Courier named her their 2017 newsmaker of the year (no surprise there), and here’s what might surprise you:

This accomplished, confident woman, used to operating under intense pressure, is a reluctant public speaker.

Former teachers and coaches at Dobbins readily classify the Staley from those days as shy, and not much changed after she arrived at Virginia. In the Sports Illustrated profile, Staley describes herself as “anti-social” and “a loner.” That hardly seems to fit the description of the coach on the sideline at Colonial Life Arena, not to mention the figure who has become a leading national voice in women’s basketball.

Like many leaders we coach, Staley realizes she has to step up and speak anyway. It’s necessary if she want to reach her goals. The Post and Courier continues:

And yet, she’s still not completely comfortable in front of a crowd. ‘Oh, I'm not, really. I just try to speak from the heart, so it’s not really a struggle,” Staley said. “When I speak, I’m moved a lot by something. I’m at my best in that scenario. But it just comes with the territory. It’s something that’s necessary at times. I know a lot of people ask me to speak at different things, and I try to exhale and figure out what would move me to speak. Because I’m not a speaker. I’m a coach.”

Staley, in that last quote, provides the solution for nearly every speaker: When you’re feeling reluctant, figure out what would move you to speak.

At The Buckley School, we’ve always called that becoming the servant of your message. When you get in touch with your purpose—remembering that you’re speaking for a reason—fears take a back seat to your desire to get your message across.

There’s one other lesson to take away from this story. We see this a lot in our Executive Seminar students. Many speakers fail to see their own abilities even as others recognize them.

When The Post and Courier interviewed Staley’s college coach Debbie Ryan, here’s what they found:

Ryan knew, deep down, that her point guard had the ability to be as communicative off the court as she was on it. She had seen hints of that as far back as Staley’s recruitment, and how at ease Staley had been around so many different kinds of people back in her hometown. Now it was a matter of establishing that same comfort level in a different environment.

“She could always relate to young and old alike. Listening to her talk about the range of people who would frequent their home, it was very obvious to me she was going to be really good with fans and all different kinds of people. I’ll be darned if that didn’t turn out to be the case. You can see, she’s like the Pied Piper of everyone.”