Books for Speakers: The Writer's Art 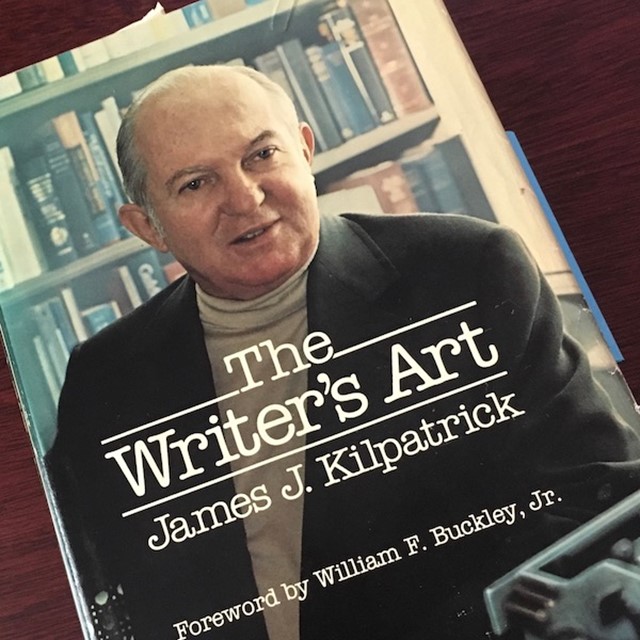 A favorite question in every class we lead is this: What public speaking books do you suggest we read? Our shelves are loaded with choices. Every month we'll be featuring a pick from new books we've come across and old favorites we go back to again and again.

"Writing comes in grades of quality in the fashion of beer and baseball games--good, better, and best."

– James Kilpatrick in "The Writer's Art"

“I just picked up The Writer's Art and almost immediately remembered why it had made such an impression on me,” says Karen Kalutz in recommending this book for speakers and writers.

“In the early years of The Buckley School, Kilpatrick scared me to death when he came to teach a writing workshop. He was a total curmudgeon. Didn't smile easily. Had very little time for niceties,” says Karen. “But I wanted to listen, because I knew I could learn.”

James J. Kilpatrick was a writer, newspaper editor, and grammarian. In the 1970s, he became widely known for participating in Point/Counterpoint on 60 Minutes, a segment that inspired a Saturday Night Live parody with Jane Curtin and Dan Ackroyd in the Kilpatrick role.

Kilpatrick publicly debated Martin Luther King, Jr. in 1960 on the issue of desegregation. In the 1990s, Kilpatrick said he regretted the position he took: “I should have had better consciousness of the immorality, the absolute evil of segregation,” he told a Virginia newspaper.

"'The Writer's Art' is not only the best book of its kind I have ever experienced; it is the most compelling reading about writing I have ever seen. If such a book were written about human biology, I would be tempted to become a doctor."

– William F. Buckley, Jr. in the foreword to Kilpatrick’s book

“The Writer’s Art” was originally a weekly column Kilpatrick started in 1981 and continued through 2008, when he retired from writing it at age 88. The book was first published in 1984.

“I've scrolled through the first few chapters again, and I think now I'll just reread the whole thing,” Karen says. “It's funny, instructive, and it promotes all the same things we promote. He makes the serious point of just how important language is, how important the proper use of the language is, not just for writers, but for all of us.”