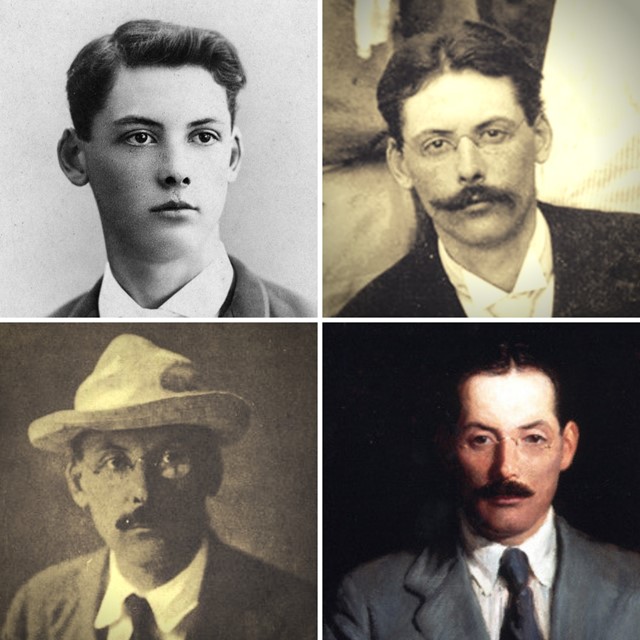 The Buckley School's founder believed that all public speakers should hone their presentation skills by reading poetry out loud. We keep that worthwhile practice alive by including a poem in our magazine each month for you to read aloud. Above, four images of poet E.A. Robinson.

"I am not sure I understand ‘Luke Havergal,’ but I am entirely sure that I like it."

A prolific poet who won the Pulitzer Prize three times, Edwin Arlington Robinson first defied family expectations of a career in business and science, then struggled to get his poems published.

Robinson was born in 1869 to parents who were wishing for a girl. They did not name him until six months later, literally drawing "Edwin" from a hat of random boys' names. Perhaps not surprisingly, Robinson described his childhood as "stark and unhappy."

His poetry, too, was often deemed bleak, with a grim humor. Robinson himself said of his early attempts at getting his work published that he'd amassed a pile of rejections "that must have been one of the largest and most comprehensive in literary history.”

By the early 1900s, Robinson was writing less, drifting between jobs, and drinking heavily. Then in 1904 Kermit Roosevelt, son of President Theodore Roosevelt, showed a book of Robinson’s poems to his father. The president became a fan, convinced Scribner’s to reissue The Children of the Night, wrote a review of it himself, and helped Robinson get a steady job at the New York Customs House.

In 1910, Robinson dedicated his book of poems, The Town down the River, to Roosevelt.

Robinson’s most-read poems today are those about characters who live in fictional Tilbury Town. It’s a New England village based on Gardiner, the town in Maine where Robinson grew up.

"His whimsical poem about the malcontent modern who yearned for the past glories of the chivalric age and who finally 'coughed, and called it fate/And kept on drinking,' is presumably a comic self-portrait."

– Robert Gilbert in the "Concise Dictionary of American Literary Biography"

"Miniver Cheevy," our poem to read aloud this month, tells the story of one of those residents. It was included in The Town down the River. The character of Cheevy is thought to be Robinson portraying himself in those difficult years before the Roosevelts discovered his work.

Grew lean while he assailed the seasons;

He wept that he was ever born,

And he had reasons.

Miniver loved the days of old

When swords were bright and steeds were prancing;

The vision of a warrior bold

Would set him dancing.

Miniver sighed for what was not,

And dreamed, and rested from his labors;

He dreamed of Thebes and Camelot,

That made so many a name so fragrant;

He mourned Romance, now on the town,

And Art, a vagrant.

Albeit he had never seen one;

He would have sinned incessantly

Could he have been one.

And eyed a khaki suit with loathing;

He missed the mediæval grace

Miniver scorned the gold he sought,

But sore annoyed was he without it;

And thought about it.

Scratched his head and kept on thinking;

Miniver coughed, and called it fate,

And kept on drinking.