Voice for the Amazon 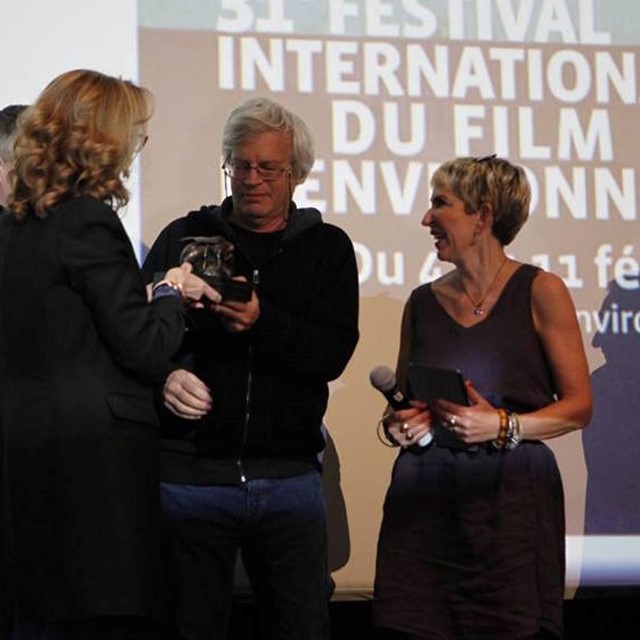 Pristine rainforest, as far as the eye could see. That’s what Sarah duPont experienced on a trip to the Peruvian Amazon in 1999. Over the next 10 years later, she was horrified and heartbroken to witness the rapid destruction that was taking place. She was determined to do something. But what?

For me, I knew that it felt like war. A war against the environment. Ecocide. Then a thought was born. Why not make a documentary that follows journalists who specialize in war reportage, filming them as they witnessed this broad, far reaching, and criminal eradication of the Amazon? This film would capture this war against nature.

From that idea came River of Gold—a documentary that follows two journalists and an environmentalist on a dangerous route down the Amazon. They see how illegal gold mining is destroying the rainforest and putting the local people’s lives at risk.

Narrated by Sissy Spacek and Herbie Hancock, the film has won major awards, been screened at international film festivals, and gotten the attention of world leaders. Sarah’s goal is to make substantial, sustainable change by educating the public and by moving governments to take action.

In 2016, Sarah updated the story, discovering that the demand for gold and the influence of organized crime have put the future of the rainforest and indigenous people in even greater jeopardy.

Though long concerned with protecting the Amazon, Sarah had never produced a film prior to making River of Gold. She also tells us she was a reluctant public speaker until she found a cause that demanded her voice.

How does public speaking fit into your work?
Sarah: Almost daily, I speak about the importance of the Amazon and repercussion of its destruction both locally and globally. The Amazon is a complicated ecosystem that affects us all in different ways. The demands for the Amazon's natural resources also come from a variety of different factors that require holistic solutions that are not black and white. Developing dialogue that is simple enough to educate global audiences while keeping the integrity of the complicated situation intact takes skill, understanding, and persistence, the very same parameters that are used in public speaking. Public speaking is an art, a skill that is necessary for engaging audiences to understand sometimes complicated issues and move them to be part of our overall goal for positive change.

What’s been your toughest speaking challenge and how have you overcome it?
Sarah: Public speaking was one of my greatest fears. Because of the nature of my work as an ambassador for the Amazon, a cause that is bigger than myself, I had to face this fear straight on. It was extremely difficult, but I was fortunate to come to The Buckley School of Public speaking twice. There I not only learned many of the skills needed to become a better speaker but also ways to overcome my fears. With this new base, I went to work to put these skills into practice, agreeing to put myself on the public stage, diligently preparing, as taught for each occasion. This was not an easy course, but it has paid off, and now I feel more confident in my role as a speaker.

What speaking tips can you share with other people who want to motivate change?
Sarah: Know your subject well, understand your audience and the arguments from all perspectives, rid yourself of language that is not necessary for your agenda, prepare in depth for each occasion. Speak with truth, passion, and heart while steering the conversation to positive collaborative solutions.

Here’s a sample of what you’ll see in River of Gold:

You can learn more about River of Gold and Sarah’s other work through the Amazon Aid Foundation.