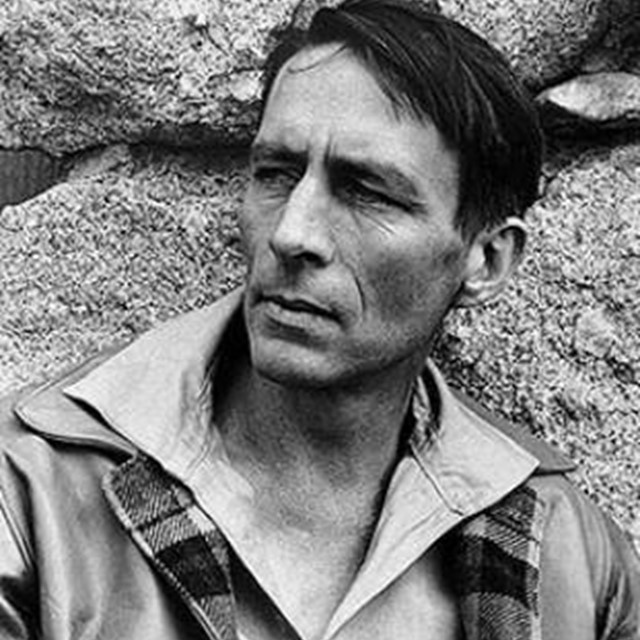 The Buckley School's founder believed that all public speakers should hone their presentation skills by reading poetry out loud. We keep that worthwhile practice alive by including a poem in our magazine each month for you to read aloud. Above, Robinson Jeffers, photographed by Edward Weston.

These days, he's often thought of as an influential eco-poet, one who questions human beings' self-centeredness as they dwell in the natural world.

At the height of his popularity, poet Robinson Jeffers was on the cover of Time—one of the few poets to ever be featured on the magazine's cover. His re-imagining of the Greek drama Medea was a Broadway hit staring Dame Judith Anderson. But Jeffers’s popularity took a hit when he opposed U.S. involvement in World War II, and he published a book of poems that his publisher warned readers were unpatriotic.

Jeffers was born in 1887 in Allegheny, Pennsylvania. The son of a Presbyterian minister, Jeffers traveled extensively with his family, attending school in Germany, France, and Switzerland. He landed in California, graduating from Occidental College at age 18.

His first volume of poetry came out in 1912. The next year, Jeffers moved to Carmel-by-the Sea, where he wrote poems and apprenticed himself to a stone mason, building his own home—Tor House—by hand. Jeffers lived here until his death in 1962.

The imagery of the California coast and the wildness of nature appear in much of his work. He developed a philosophy of inhumanism, which he described as "a shifting of emphasis from man to not man; the rejection of human solipsism and recognition of the transhuman magnificence."

Below, for you to read aloud, a poem published in Poetry magazine in 1940 that may capture some of your feelings as you watch the news these days.

The Stars Go Over the Lonely Ocean

Unhappy about some far-off thing
That are not my affair, wandering
Along the coast and up the lean ridges
I saw in the evening
The stars go over the lonely ocean,
And the black-maned wild boar
Plowing his snout on Mal Paso Mountain.

The old monster snuffled "Here are sweet roots,
Fat grubs, slick beetles and sprouted acorns.
The best nation in Europe has fallen,
And that is Finland,
But the stars go over the lonely ocean,"
The old black-bristled boar,
Tusking the sod on Mal Paso Mountain.

"The world's in a bad way, my man,
And bound to be worse before it mends;
Better lie up in the mountain here
Four or five centuries,
While the stars go over the lonely ocean,"
Said the old father of wild pigs
Plowing the fallow on Mal Paso Mountain.

"Keep clear of the fools that talk democracy
And the dogs that talk revolution,
Drunk with talk, liars and believers.
I believe in my tusks.
Long live freedom and damn the ideologies,"
Said the gamey black-maned boar
Plowing with his snout on Mal Paso Mountain.

To see Tor House, the stone house Jeffers built himself in Carmel, and how you can visit it, go here.

Here's one writer's account of visiting Tor House, reflecting on how it captures Jeffers’s passionate and enduring love for his wife, Una.

For more inspiration, see this article about the attraction of Big Sur for writers that may make you want to plan a trip yourself.