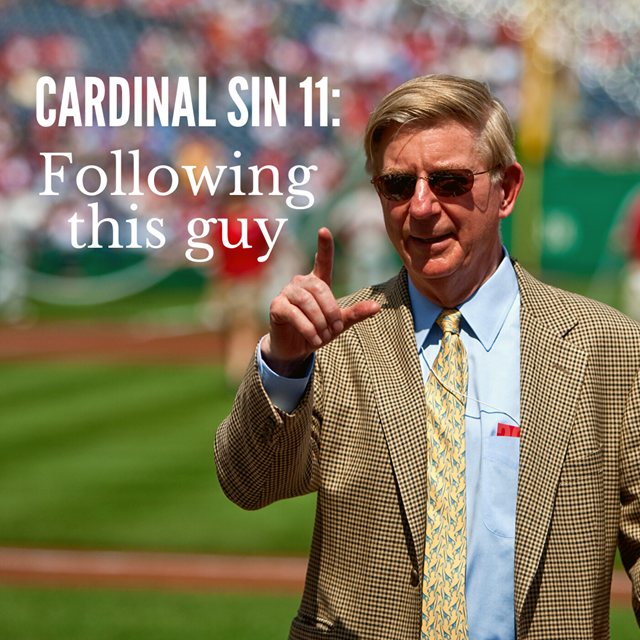 George Will, looking like a rock star at a Nationals game. Photo by Cathy T/Flickr.

"Never follow a rock star. Cough up blood if necessary."

This year, we published excerpts from Chapter One of Reid Buckley's book, Strictly Speaking: "10 Cardinal Sins That Amateurs Commit or How Not to Gape Your Mouth So Wide That Your Tonsils Fall Out..."

The chapter concludes with an 11th cardinal sin, for Reid was not one to be limited by guidelines--even those of his own making. We'd planned to skip number 11. After all, how many of us speak after George Will anyway.

Then last week, a client told us he had introduced none other than George Will, and that he referenced Reid's cardinal sin in his introduction. His story made us reconsider. So here you go:

Never speak after George Will.

...Nor before him for that matter. Which is why these 10 Cardinal Sins stretched into 11.

It's like going before or after a stand-up comedian crossed with Samuel Johnson. George Will has been accused of erudite one-liners, but that charge is on the order of postulating a surfeit of caviar. (There's no such thing.)

Never make the mistake of trying to compete with a phenomenon. Ask to be excused. Cough up blood. If that's impractical, courage!

Keep your remarks brief, low-keyed, and utterly unrelated to what the star has said or plans to say. If his talk is going to be political, stun the audience with your grandaunt's recipe for pecan pie. Then wait for a better night.