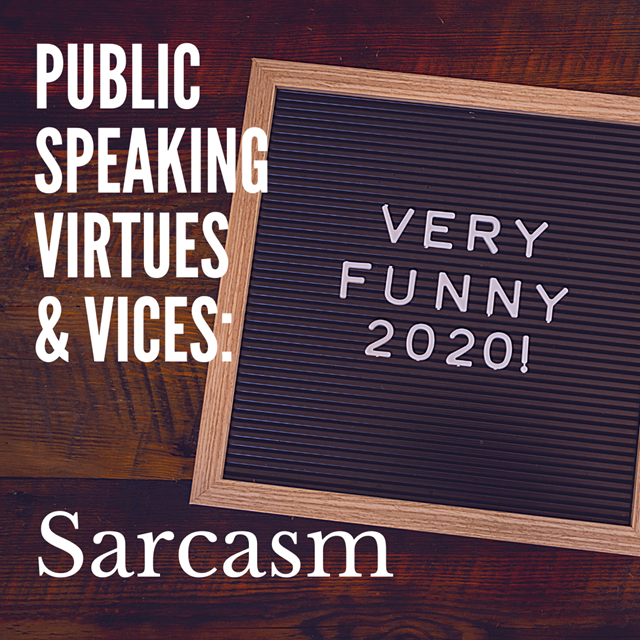 "Along with what can be high intelligence, there's meanness in the sarcastic temperament."

– Reid Buckley, on The Vices in "Strictly Speaking"

The sarcastic temperament has its uses, principally in enabling the speaker to maintain a detached view of the issue, which can prevent him from being naive or credulous or from going overboard in fanaticism.

Sarcasm is the best attitude for pouring scorn on what is truly disreputable, revolting, or wrong. But should sarcasm become habitual in a person or a speaker, which is an almost certain peril when left uncompensated by charity or true humor, it can sour into disposition; amusing, maybe, in the beginning of a talk but which spills corrosive acid over everything and ultimately alienates the audience because of its negativism. Sarcasm can project its own breed of arrogance.

The attitude can often suggest a juvenile sneer. The upper lip is lifted under the nostrils in an incipient snarl or smirk of superiority. The upper lids of the eyes tend to cast down over the eyeballs, gimlet fashion, as though the speaker is examining a laboratory specimen of stupidity preserved in formaldehyde. The speak is oh so blasé, has seen or encountered this or that oh so tediously often.

There is little sense of fun in the sarcastic temperament; it does not surrender itself to joyous laughter because it views so little under the sun genuinely to be amused by. There is a rotten core in any apple; there is a worm coiled in the heart of existence. Along with what can be high intelligence, there's meanness in the sarcastic temperament.

"Look, a clock. We don't have that in America."

Charity. Indulgence for the human comedy. The habit of laughter. And the acknowledgement that one is neither superior nor immune to those venalities, foibles, pockets of obtuseness or stupidity, foolish enthusiasms, or ingenuous credences that beset the human race.

A particular thing, or belief, or attitude, or policy may be beneath contempt, meriting only scorn, but not everything.

The sarcastic temperament must be ever so careful to draw the distinction between sin and sinner: to assert the flatness of the earth may be blind denial of reality, but those who harbor this Bronze Age delusion may in most other respects be kind, good, and even reasonably intelligent.

If there is no hope for the audience, no possibility in their remediation, then in the act of getting up on stage and speaking to them, am I not myself displaying an unregenerable stupidity the equal of theirs?

If your answer is yes to that question, step down. Never again accept an invitation to speak. Never more attempt to persuade anyone else to your (superior) views.

But should you answer be not quite yes, subject your own soul to examination, admit remorse, aspire to repentance. And next time you speak in public, display the mildness of humility you have acquired, while every now and then spiking error with the same old fervor and malicious delight.