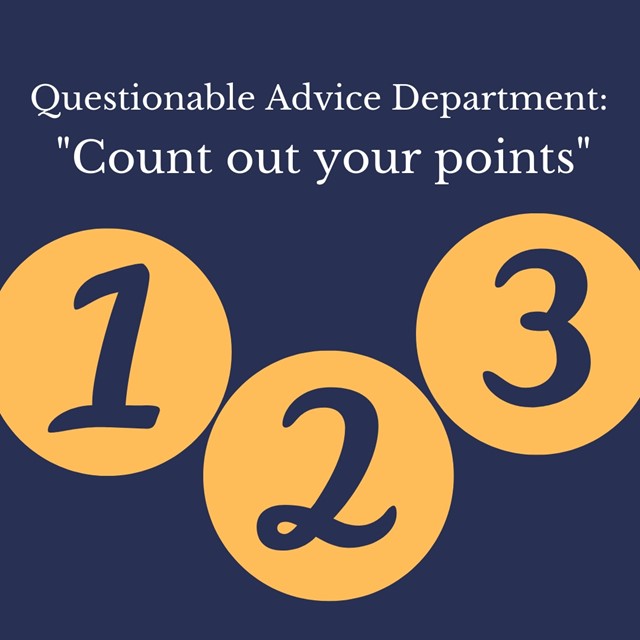 – from a Fast Company article, "How to Get People to Listen to Your Ideas"

It is a common—and helpful—organization tool: Enumerating your ideas in a presentation.

What’s good about it? As Buckley School director Karen Kalutz tells our students:

So why do we question the advice to count out your points?

Because enumerating has a few pitfalls. Be sure you know them, so that you can avoid them. Here are four we see quite often:

1. Some speakers promise a certain number of points, then don’t deliver distinct points the audience can identify.

If you say "There are three reasons we should do this," the audience will be counting. If they can’t identify your three reasons, they’ll either wonder if you know what you're doing or worry that they missed something.

If you promise a number of points, you must make it easy for the audience to keep count. (Tip: You don’t have to number them to make them distinct; scroll down to point number three for more on that.)

2. Some speakers promise a certain number of points, begin enumerating, but fail to deliver the number promised.

This is a little different from the problem above. When a speaker says "There are three reasons we should do this," he might follow with "Reason number one…" then, "Reason number two…" But if he fails to clearly spell out "Reason number three…" or worse, just forgets to include the third reason, this enumeration backfires.

The audience becomes preoccupied: "Where is that pesky reason number three?" they ask themselves. In this scenario, they’re more likely to put the blame on the speaker rather than themselves. After all, he promised three reasons.

Buckley School director Jenny Maxwell recalls giving this feedback during on-site training with a group in Washington, D.C. Several people in the group laughed. "Apparently a certain U.S. senator they’d worked with was notorious for promising three points and only delivering two," Jenny says. "They kept pointing it out but could never get him to change his approach."

3. When there are multiple speakers in a program or meeting, enumeration seems to be more contagious than chicken pox.

If you are the third speaker on a program and the two prior to you have enumerated, resist the urge to do so, as well. By speaker number three, enumeration sounds like a formula—one the audience is probably weary of hearing.

You can still make three points (or four points or two points), but you don’t have to number them as you present them. Instead, you might introduce each new idea with a strong statement, a headline. Then pause before you move to the next idea.

4. You promise an overwhelming number of points—then, to our horror, deliver on that promise.

It's one thing to tell an audience there are two ways out of a problem or four options to consider. But when you promise an audience you’ll deliver 23 ways to achieve a goal, you are suggesting something that sounds painful to most of us.

That’s not to say a lengthy list can never work. It might, especially when it’s played for humor. But we’ve encountered people who were serious about making an overwhelming list of points, with no regard for how the audience might respond.

Some suggestions if you really do have 23 points to cover:

As with every other communication technique, enumeration should be used thoughtfully, deliberately. It is a great way to make information accessible and memorable. Just avoid the pitfalls and don’t default to counting things out every time you speak.