Rhetorical Device of the Month: Tricolon 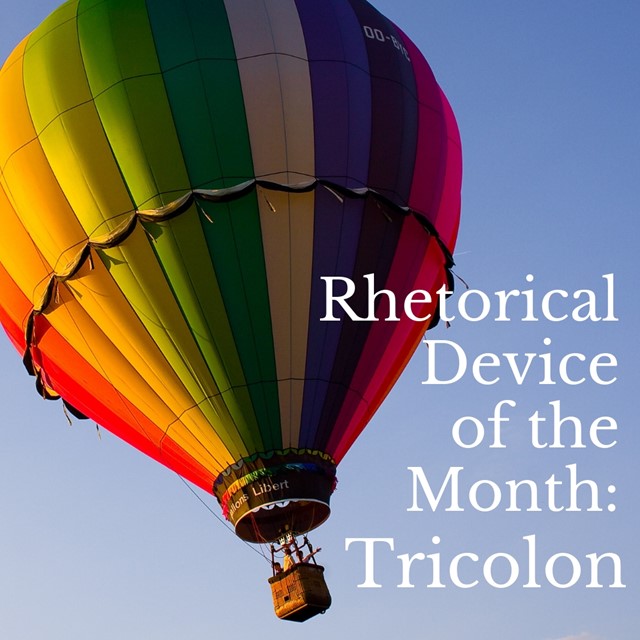 "You are talking to a man who has laughed in the face of death, sneered at doom, and chuckled at catastrophe."

– The Great and Powerful Oz, telling Dorothy he will take her home by balloon in "The Wizard of Oz."

It’s hard to escape one of our public speaking courses without hearing about the rule of three—and how it can help you make your messages better organized and easier for audiences to recall.

Our Rhetorical Device of the Month uses the rule of three combined with another of our favorite structures—parallelism.

Tricolon is use of three phrases in succession, with all three constructed in the same pattern. It combines tri for three with the Greek word kolon that means literally "limb or tree" and also figuratively a section of a sentence.

Consider how it works in these two examples from President Dwight D. Eisenhower’s speech, The Chance for Peace:

"Every gun that is made, every warship launched, every rocket fired signifies, in the final sense, a theft from those who hunger and are not fed, those who are cold and are not clothed."

"This world in arms is not spending money alone. It is spending the sweat of its laborers, the genius of its scientists, the hopes of its children."

Often when using a tricolon, the speaker will build over the series of three—increasing the intensity of emotion, the scope of the problem, or the horror of the outcome.

Here’s how President Barack Obama used a tricolon in his speech at the memorial service for Nelson Mandela in 2013:

"Let us search for his largeness of spirit somewhere inside of ourselves. And when the night grows dark, when injustice weighs heavy on our hearts, when our best-laid plans seem beyond our reach, let us think of Madiba and the words that brought him comfort within the four walls of his cell."

Comedy writers also use tricolons but with a twist—making the third of the series something unexpected. Some people call this a comic triple.

Here’s a line said by Johnny Depp’s character Captain Jack Sparrow in the movie Pirates of the Caribbean that shows how it works:

"I actually feel rather good about this. I think we’ve all arrived at a very special place, eh? Spiritually, ecumenically, grammatically."

We find ourselves wondering--did Captain Sparrow use this tricolon while wearing his tricornered hat? And would that qualify as a triple double? Or maybe that should be a double triple.