Rhetorical Device of the Month: Adynaton 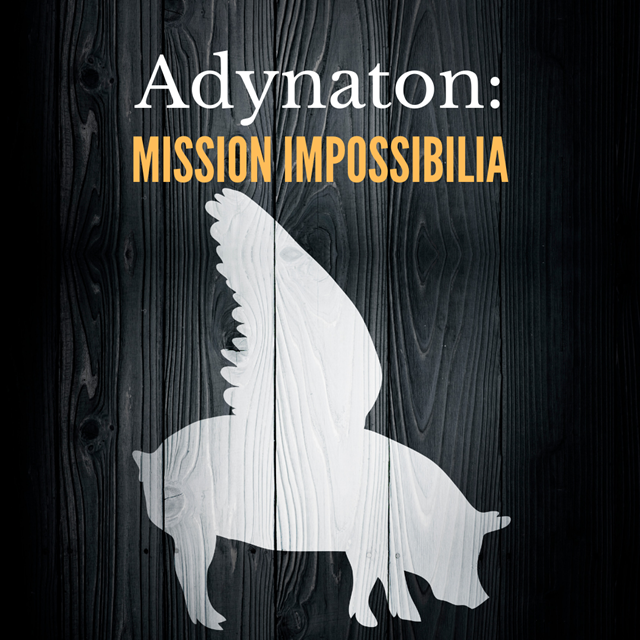 "Until the dolphin flies and parrots live at sea"

– From the Stevie Wonder song "As"

By JENNY MAXWELL and JANA DALEY

If hyperbole is exaggeration, what happens when you super-size it?

You get adynaton—an exaggeration so hyperbolical, it implies the totally unfeasible.

When hell freezes over.

You get the idea. In many cases, it's a memorable, colorful way to say "impossible!" And who doesn’t appreciate that?

The technique has been around since classical times and the term derives from the Greek adunaton which means, yes, impossible. In Latin, the same technique was called impossibilia. It’s also referred to as the idiom of improbability.

And it seems every language and culture has its own version of when pigs fly:

When hens grow teeth—from the French

When the crawfish whistles on the mountain—the Russian take

One afternoon in your next incarnation—as translated from Thai

Hell may indeed freeze over before we master the pronunciation of adynaton. There are a couple of opinions on the matter:

We're not willing to certify that either of these is 100-percent correct. (Feel free to get in touch if you can provide the definitive word on how to say this word.)

As for more refined examples of the device in use, you can look to Seneca, Shakespeare, the Bible, and any number of love poems.

"One can expect an agreement between philosophers sooner than between clocks" writes Seneca in his satirical play about the Roman emperor Claudius.

"I will sooner have a beard grow in the palm of my hand than he shall get one of his cheek," says Falstaff in Shakespeare’s Henry IV.

"It is easier for a camel to go through the eye of a needle, than for a rich man to enter into the kingdom of God." Matthew 19:24 from the Bible

If you'd like to learn a bit more about the Mission: Impossibilia of rhetorical devices, you might enjoy this article which includes examples of people trying to prove that pigs can fly and that a camel can, in fact, pass through a needle.