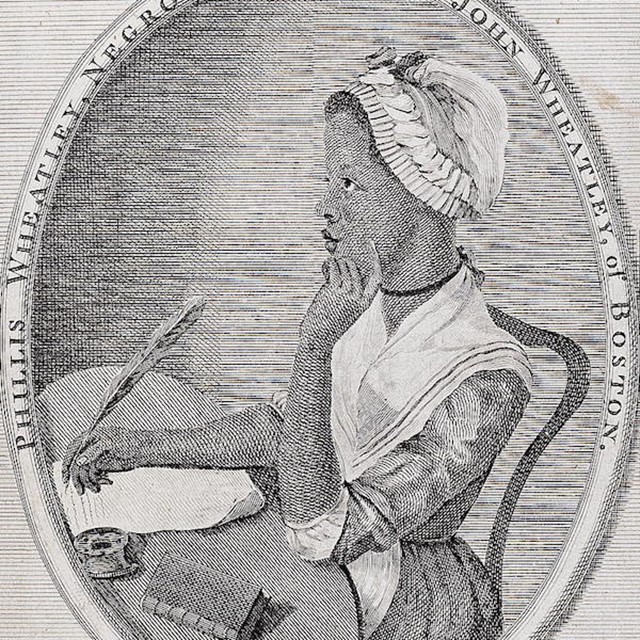 The Buckley School's founder believed that all speakers should hone their presentation skills by reading poetry out loud. We keep that worthwhile practice alive by including a poem in our magazine each month for you to read aloud. Above, a portrait of Phillis Wheatley drawn by Scipio Moorhead.

Records show she was purchased by the Wheatley family of Boston in August 1761. ​In a review of a Wheatley biography for The Dallas Morning News, poet Elizabeth Hoover writes:

Phillis Wheatley was about 7 in 1761 when she endured the Middle Passage. During her two-month journey she watched a quarter of her fellows perish and thrown in the sea. Once in America, her owners, a well-off Boston couple, treated her more like a pet than a servant, showing off this precocious girl to their friends.

At first her ability to write poetry was an entertaining curiosity, but it eventually brought her international acclaim and secured her freedom.

Her poem “On Being Brought from Africa to America” doesn’t relate the harrowing details of her kidnapping, rather it seems to sing its praise: “Twas mercy brought me from my Pagan land/ Taught my benighted soul to understand.” This eight-line lyric caused her to be rejected by many black poets and writers for taking on the views of her oppressors. For years she was considered a slavery apologist and accused of having a “white mind.”

Despite the many obstacles she faced—slavery, chronic asthma, an impoverished life as a freed Black woman in post-Revolutionary War America—Wheatley is thought to have written 145 poems. Her work was admired in both the colonies and in England. She died on December 5, 1784. She was 31 years old.

Here’s a poem to read aloud from her first collection, published in London when she was just 20 years old:

A Hymn to the Evening

Soon as the sun forsook the eastern main

Majestic grandeur! From the zephyr's wing,

Exhales the incense of the blooming spring.

Soft purl the streams, the birds renew their notes,

And through the air their mingled music floats.

Through all the heav'ns what beauteous dies are spread!

But the west glories in the deepest red:

So may our breasts with ev'ry virtue glow,

The living temples of our God below!

Fill'd with the praise of him who gives the light,

And draws the sable curtains of the night,

So shall the labours of the day begin

More pure, more guarded from the snares of sin.

Then cease, my song, till fair Aurora rise.