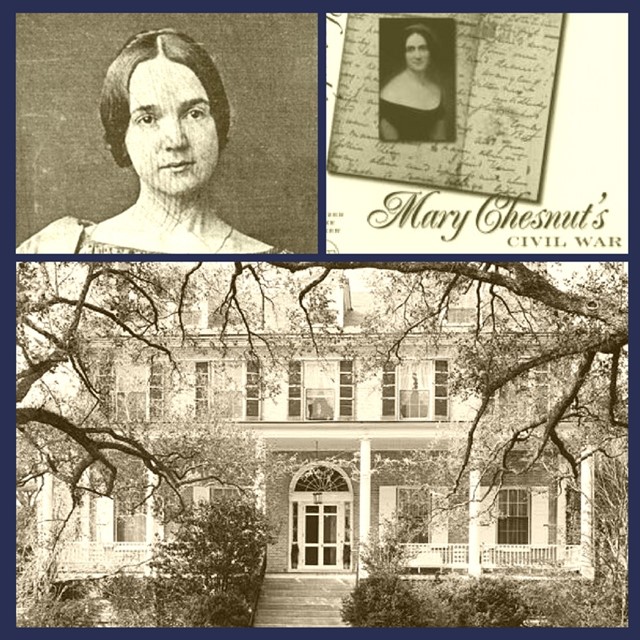 Some visitors come to Camden looking for her.

She was barely 17 when when married James Chesnut, Jr., left her home in Charleston and came to live in Camden, herself.

Today, neither is as well known as she is. Her Diary from Dixie is an acclaimed, first person history that was used extensively in Ken Burns’s series about the Civil War. A version of her book published in 1981 as Mary Chesnut’s Civil War won the Pulitzer Prize for history.

Writing and Revising Diary from Dixie

Scholar Elisabeth Showalter Muhlenfeld spoke of her research on the life and work of Mary Boykin Chesnut in a lecture full of fascinating details.

She examines how the well-educated young woman developed as a writer, comparing one of her initial diary entries to the final version Chesnut edited for publication.

Here’s an excerpt from the transcript of Muhlenfeld's remarks:

To give you a sense of how diary became book, let us look at comparable passages in the original diary and Mary Chesnut’s Civil War. On April 12, 1861, Chesnut records her distress with great immediacy:

“Mr. Chesnut sent off again to Anderson. The live long night I toss about - at half past four we hear the booming of the cannon. I start up - dress & rush to my sisters in misery. We go on the house top & see the shells bursting. They say our men are wasting ammunition.”

More than 20 years later, the incident develops as a deliberate narrative, beginning with a clear description of the situation:

“I do not pretend to go to sleep. How can I? If Anderson does not accept terms - at four - the orders are - he shall be fired upon.”

Like any good writer, Chesnut works to build tension:

I count four - St. Michael chimes. I begin to hope. At half-past four, the heavy booming of a cannon.

I sprang out of bed. And on my knees – prostrate - I prayed as I never prayed before.

There was a sound of stir all over the house - pattering of feet in the corridor - all seemed hurrying one way. I put on my double gown and a shawl and went, too. It was to the housetop.

The shells were bursting. In the dark I heard a man say “waste of ammunition.”

"Brutal men with unlimited power are the same all over the world."

Beyond Dixie: A writer with her own views

Along with writing and re-writing the Diary, Chesnut wrote three novels, and a translation of French poetry and essays.

In her writing about the South, she’s noted for her frank accounts of the abuses of slavery and her opposition to it, her views on the unfair treatment of women, and the power exercised by white men.

Chesnut’s insights into Southern life and the Civil War are tied to the many years she spent in Camden. She first lived with her in-laws at Mulberry, their plantation three miles south of Camden. That house is now on the National Historic Register.

Chesnut and her husband built two houses in Camden in the 1840s and 50s--Frogvale, built in 1846, then Kamschatka, a house later owned by the Buckley family.

Bloomsbury--now a bed and breakfast popular with students in town for The Buckley School's Executive Seminar--was visited frequently by Mary Boykin Chesnut. It was built for her sister-in-law Sally Chesnut.

During the Civil War, Mary Boykin Chesnut moved to a number of places including Charleston, Columbia, and Richmond, while her husband served as a leader in the Confederate army. After the war, she returned to Camden and a much changed Mulberry Plantation. In 1873, the Chesnuts left Mulberry and built Sarsfield, a two story brick house you'll find at 136 Chesnut Street.

It was at Sarsfield where Mary Boykin Chesnut did much of her work to revise the Diary. She died at Sarsfield in 1886 and is buried at Knights Hill Cemetery.

Here’s a blog post from 2016 describing one woman’s attempts to find where Mary Chesnut Boykin lived in Camden.

CSpan’s American Writers series dives into Mary Chesnut’s life story, with a Chesnut researcher who portrays her. The program was broadcast from Mulberry Plantation.

Below, some of the 200 Civil War-era photos from Chesnut's albums at the South Caroliniana Library, plus an interview with  Marty Daniels, the great great granddaughter of Mary Chesnut's sister who lives at Mulberry Plantation today: