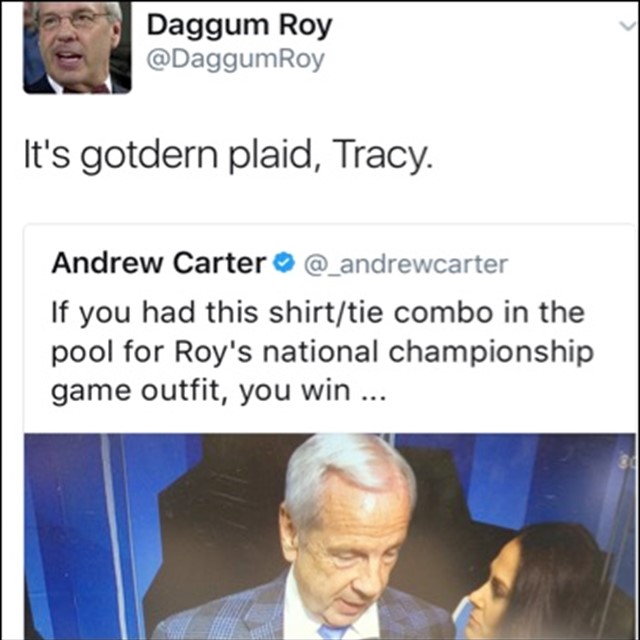 “Best daggum bath I’ve ever had with my clothes on.”

– UNC Head Coach Roy Williams when his team doused him after winning, from an article about his accent in The New York Times

Do I need to change my accent?

It’s a question Buckley public speaking faculty are asked frequently. Two examples from this year’s NCAA national championship basketball teams show why our answer is “no.”

University of North Carolina men’s coach Roy Williams is almost as famous for his regional accent and quirky expressions as he is for winning. The New York Times recently wrote about the way Williams talks.

The Times article illustrates exactly why accents can be a plus for public speaking:

In the placeless sport of college basketball, whose most famous coaches have tended to come from someplace else….Williams speaks the way he speaks in part out of a sense of where he was from.

Buckley School director Karen Kalutz, a native South Carolinian, tells speakers, “Your accent can be your best weapon. It can set you apart from a panel of speakers. It makes you memorable.”

It also signals confidence. Of Williams, the Times writes:

What Williams’s vocal style perhaps reveals is a fundamental comfort with where he came from and who he is.

Williams isn’t the only national champion whose regional accent is working for him. University of South Carolina player Allisha Gray narrated a series of videos during the team's run to the NCAA national championship, describing what the team ate each day in “Lunch with Lish.”

Gray is from Georgia and her head coach, Dawn Staley, teases her in one video about her many-syllabled pronunciation of words such as “eggs.” Not long after, fans were calling for a t-shirt with “ayugs” on the back. Gray’s accent became part of the fun--and you can see her confidence grow with each video.

Every public speaker has an accent

One other thought we have about accents is expressed in the Times article, by a man from Williams’s hometown: “He doesn’t have an accent. You have an accent.” Or as school director Jenny Maxwell tells our Executive Seminar students, “If you don’t think you have an accent, you need to get out a little more.”

Here’s an article about Gray’s videos and two about Williams--The New York Times article about his speech patterns and another on his Roycabulary from The Charlotte Observer.