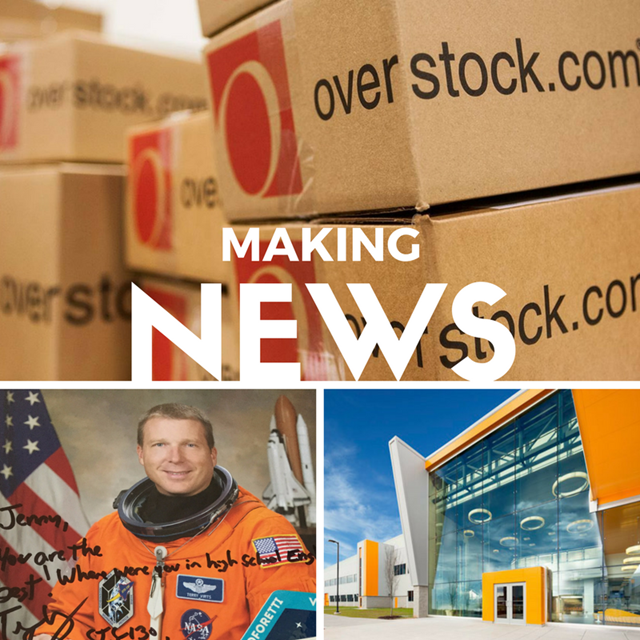 Whenever we see good news about Buckley alum, we’re excited to pass it on, including these things that have made their way recently to The Buckley School inbox.

Overstock President Saum Noursalehi has been named to the company’s board of directors. Saum, one of the smartest and humblest speakers we’ve ever worked with, joined Overstock in 2005 and was named president last year. “As president, Saum has already taken decisive steps to maintain Overstock’s position as a leader in home retail for the short and long term,” said Overstock founder and CEO Dr. Patrick Byrne (a longtime Buckley School supporter). “His deep understanding of both the economic and technical components of ecommerce is a welcome addition to an already strong board.”

“Virts, who flew to space twice during his NASA career for a total of 213 days off the planet, is a disarmingly thoughtful astronaut.”

Astronaut Terry Virts was featured in Time magazine with a preview of his soon-to-be released book of photographs from space. Terry is a wonderful speaker with incredible stories to tell. He spent 200 days in space as commander of the International Space Station, taking thousands of photographs. His images and voice already star in the IMAX film A Beautiful Planet.

Architect Jane Frederick and her firm, Frederick+Frederick Architects , were honored with the 2017 AIA South Carolina Firm Award, the highest honor bestowed by the chapter. Jane, who is also a national American Institute of Architects board member, established the firm with her husband in 1989. Based in Beaufort, S.C., they’ve built a reputation for designing houses that suit the humid, Southern climate.

Their houses have been featured in major publications. This story from Garden and Gun describes the firm’s work to restore an important piece of American history, the former home of Robert Smalls.

We were also delighted to see McMillan Pazdan Smith Architects’ Melanie Anderson wielding the golden shovel in a story from GSA Business Report. Melanie was participating in the groundbreaking for a new residence hall at Newberry College, for which she is the project designer.

Mashburn Construction Company CEO Harry Mashburn announced his retirement recently, making way for his sons to lead the company he built. Many well-known and much-loved buildings in North and South Carolina have been Mashburn Construction projects, including churches, hotels, schools, and commercial sites. Harry founded his company in 1976  and will continue on as chairman of the board.